Contributor
Design
Logistics
SpecOps
I occasionally look around for promising artists that might be able to help us out with Terasology stuff, including commissioning work (with personal funds) to get stuff started at times. Enter a recent request I made for the author of Flipside (which by the way is a neat webcomic, read it!) for an evil / corrupted / warped / mutated Gooey:

The author, Brion Foulke (Twitter, Patreon), has a creature called the "Maw" in the comic that presents itself as a gelatinous type creature with a creepy upside down face of sorts on it. Seemed a perfect fit to get a less friendly version of Gooey that might be suitable to stalk dark caves or dreary swamps!

I think it turned out pretty nicely, and in my mind has become a sort of parasite situation where the upside-down face part could be an invasive entity that takes over an otherwise regular Gooey, causing the extra growths like spikes or eyes to appear (maybe even varied procedurally for different instances of these "Maw Gooeys" ?)

The dark spots on the face/head are meant to be empty eye sockets - at one point I thought they looked like teeth, and maybe that could be a thing since the main eye actually appears where the mouth would normally be.

The two drawings to the right are animation suggestions, although the swinging tentacle might be more tricky and the opening maw would probably be the easier and more thematic choice. After all gelatinous things swallow stuff right?

Quaternius who is another recent artist went ahead and did an initial 3d model: 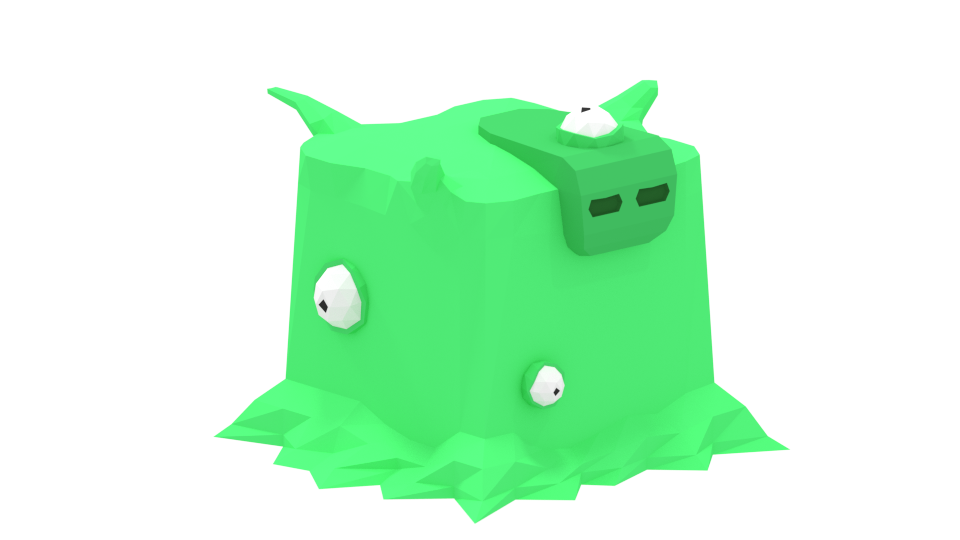 The added details bump up the poly count a fair bit, I believe this one is about 600 polys. It does have some of the edges / low poly feel too it and it is still a cube at heart

An additional possibility would be texturing in a faded sort of original Gooey-face where you can make out marks from before the possession, a sad fragment from the past that nearly screams out "help me!" - especially as that whole part of the body is twisted into the attacking maw animation. Maybe that's a bit dark (for kids especially), but perhaps the player can help evict the parasite and restore the original Gooey, who would be eternally grateful? Or even cultivate the parasites and control them somehow to make a dark squishy army of wicked molasses?

Another idea would be varying the color, much like has been discussed for Gooey in the past. Brion suggested dark purple which sounds good to me, we could even match the colors with special abilities like fire resistance, extra poison/acid attacks, and so on.

Any more ideas, thoughts, etc?
Last edited: May 1, 2017
I link, therefore I am. I tweet, therefore I work. Rainbow collector, undaunted optimist, organic search bot, and crazy idea guy. Will give serious thought to anything at least once. Do feel free to disagree and express productive counter views, in public or via convo, any time!

Contributor
Art
World
SpecOps
I love the artwork and am following that fellow now!

The tentacle animation looks a little bit like a tongue that just emerged from Gooeys body (or should I say mass). It snaps out of nowhere to catch prey and anything that was not cautios enough.
As for the color, I first imagined something grungy, smudgy - basically the opposite of a clean, solid color. For me, it's a slimy creature you don't want to touch. You probably don't want to have it near you.

The dark purple you mentioned reminds me of Purple Tentacle :-D Contributor
Design
Logistics
SpecOps
Yeah! It could be like a frog-tongue, darting out to stick on something then suck it in! That seems like it would be easier too, it essentially just warps the front face outward to some degree

Also: nice reference!
I link, therefore I am. I tweet, therefore I work. Rainbow collector, undaunted optimist, organic search bot, and crazy idea guy. Will give serious thought to anything at least once. Do feel free to disagree and express productive counter views, in public or via convo, any time!
You must log in or register to reply here.
Share:
Facebook Twitter Reddit Pinterest Tumblr WhatsApp Email Link
Top