As The Project GooeysQuest is still abstract, I propose the following ideas for the project: 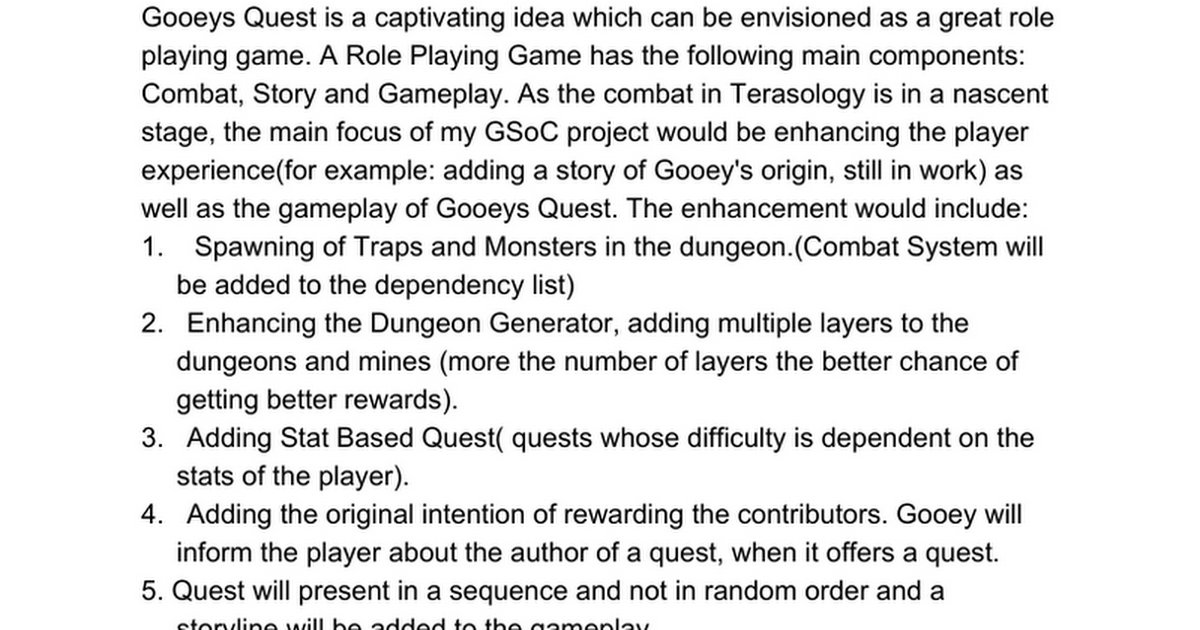 GSoC Draft IdeaList: Gooeys Quest Enhancements Project Details Overview : Gooeys Quest is a captivating idea which can be envisioned as a great role playing game. A Role Playing Game has the following main components: Combat, Story and Gameplay. As the combat in Terasology is in a nascent sta...

Contributor
Some good ideas there, I do have a few comments though. I assume this is just a list of ideas rather than a complete proposal for GSOC due to its lack of elements like a timeline.

You talk about spawning monsters, though explain that combat isn't planned. How would the monsters be dealt with without combat? Traps are doable with what I take to be your current plan.

Quests as they currently exist mainly provide additional exploration. The difficulty of the quest is therefore somewhat subjective - though less so once you add traps (goal is to not die). Is your intention to add more distinct goals - Gooey tells you to go find Artifact A and will give you Reward B in return, for example? If so, you'll have to consider how to ensure that Gooey's given quest is obtainable, as IIRC Gooey currently offers a random choice of which structure he'll generate, and the pieces of that aren't set.

If my assumption about your goal for quests is correct, you'll also want to consider the fun factor for players. Fetch quests would be fairly easy to implement, but not particularly interesting for the player. Finding a balance between procedural generation and set quests (which can be more interesting) could be a challenge, as would be figuring out the background behind Gooey and his quests if you do decide to create such lore.

With the current draft, I'm not entirely sure if I'm understanding your goals for the quests themselves. More information as to what your vision for quests entails would be helpful.
S

@RatMoleRat thank you for the review. I was thinking of spawning the monster as a part of the project and Introducing the ConbatSystem module but not focusing on the combat part of the project during the span of the Sumer, can be added to the Stretch goals though.

I was thinking to introduce the origin story of Gooey for this, here is the draft idea till now: Gooey has lost his memory of the past and wants to know how he came to be can't fully recall his memory and you as the player have to do the task given by Gooey to help him recall his past, but lately I feel that the idea is very generic, do you have any better idea or storyline to make the game more fun (can't get my hands on a good storyline).

Contributor
For the monsters and combat system, I suppose it depends on how confident you are that introducing the combat system can be done effectively enough to have the monsters functional. It depends on how full your planned timeline/scope ends up being, but perhaps monsters should be a stretch goal as well or, alternatively, you should make the combat system (as well as monsters) a normal goal and place more emphasis and time on its integration and improvement.


Sugam45 said:
do you have any better idea or storyline to make the game more fun
Click to expand...

Perhaps @Adrijaned 's lore threads could provide some inspiration for your storyline?

In the time before time, naught existed but endless stone. The endless stone was only broken by small air pockets, none more than a few blocks large and vast distances apart. In one of those caves, The Old arose, of endless wisdom and power. The first thing He did, He made time begin, for else...
forum.terasology.org

Contributor
With a shadow fall, a shape appeared. The sun was just setting down, but the world was soon to be overseen by The Woken from the Goo, the almighty governor, the all-known Gooey!

He completely formed, and then he looked around and smiled. The cave he was in seemed to be one of the better ones, with solid land and lots of plant life, a decent sun judging from the last glimpses he could see, and... was it some cave, there right in front of him? No, it was too regular shape for it to be a cave. Was it some sort of dungeon? Maybe this was just what he was looking for.

Just when the sun finally fell beyond the horizon, he felt a small disturbance behind him. Looking around, he saw one of these. He knew not what they were, but he encountered them before and they were quite fine to chat with. Most of them even seemed able to travel between the caves, or go to worlds completely different he couldn't even dream of. Albeit, they were quite primitive, and often didn't mind doing even dangerous things, just for fun, even though they could easily die.

"Well," the Gooey though, "it's nice out there, and the being seems capable. Might as well send him down there instead of me, if he wants".
Master of swag and lore, Creator of biomes, Overseer of Sol.
S

@Adrijaned sounds pretty good to me.
I really liked this thread, can I include it in Gooey's dialogue window under random information about Offere triplicata gramina , we can add appropriate dialogue as well for each information.

Contributor
sure
Master of swag and lore, Creator of biomes, Overseer of Sol.
S

Contributor
Design
Logistics
SpecOps
I added in some feedback, as did RatMoleRat

Overall: You're trying to do too much. Try to dig deeper into fewer primary goals. More detailed estimates on fewer items make for a safer proposal to consider. You can always go nuts on stretch goals if you finish faster than expected or want to keep going later.
I link, therefore I am. I tweet, therefore I work. Rainbow collector, undaunted optimist, organic search bot, and crazy idea guy. Will give serious thought to anything at least once. Do feel free to disagree and express productive counter views, in public or via convo, any time!

Contributor
Architecture
I kind of agree with Cervator here, you have a list of things you want to do but the scope is too large for GSOC.

What I would recommend is just grab one of your sections and stretch out the whole thing. For instance you mentioned puzzle rooms. I think there is some interesting aspects in regards to puzzle rooms. If each puzzle room is random does that mean components from one puzzle room can be used in another? what kind of puzzles would be in a given puzzle room and what puzzles could the player solve? does the player get locked into some puzzle rooms are there penalties for failing a puzzle room? What kind of rewards could we expect? You can list out all the rooms you would like to add and how you would go about implementing them.
S

Proposal Updated.
I have shifted Changing Difficulty of Quest and adding information about Gooey to the Stretch Goals. I have also added a Task Section to give detailed information about my goals.
You must log in or register to reply here.
Share:
Facebook Twitter Reddit Pinterest Tumblr WhatsApp Email Link
Top