Overview:
The project is aimed at implementing a sheep shearing system in Josharias Survival and animal interaction improvements in Terasology. Currently, the only way to obtain wool in-game is by killing a sheep. A Sheep shearing mechanism will help the player obtain the wool item in-game. Apart from this various interaction elements such as flocking and luring animals will be introduced. These improvements are supposed to aid the player in the survival aspect of the game. Currently, animal spawning only works upon chunk loading. This will be improved by creating a new spawning mechanism for animals which will allow spawning during runtime of the game. These improvements will benefit all gameplay modes in Terasology.
M

In this post, I aim to summarize all of the work I have done during the past months in the GSoC coding period.

The sheep shearing system adds a mechanism to Josharias Survival that allows a player to obtain wool by shearing sheep. The shearing can be shown in the following stages : 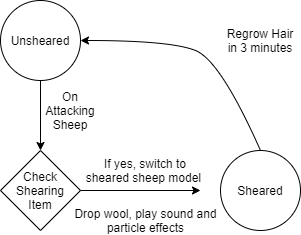 The shearing also makes use of a new particle effect, sound asset, and crude shears tool. Once the whole system was in place, extensive documentation and unit tests were written to ensure better maintainability of code.

This portion consisted of implementing a new spawning module, sheep luring, and sheep flocking. Before the new implementation animal spawning only works when a new chunk is generated. This was improved to random spawning during runtime using a new module. Apart from this luring sheep was implemented using Behaviours. So now a player can lure sheep in a certain radius while holding fodder. This is a step forward towards making sheep rearing possible as a whole. Now, all we need is a way to flock sheep.

The flocking of sheep is the only task pending and it requires fixing gates. Currently, it's in progress and will be completed soon.

I had a great time working with @niruandaleth, @keturn, @casals, @Skaldarnar, and @ktksan. My mentors were really supportive throughout the journey and were very helpful! The whole community was very helpful and provided a lot of insights during my project. Our weekly meetings were regular and essential in helping me solve a lot of issues throughout the project. Thanks to the Terasology Foundation for such a great experience!
Last edited: Aug 23, 2021
You must log in or register to reply here.
Share:
Facebook Twitter Reddit Pinterest Tumblr WhatsApp Email Link
Top