Contributor
Design
Art
I was contemplating another simple dichotomy that might fit well for a "proof of concept" game mode for Terasology and started thinking in the simplest terms possible. Light and Dark. Not necessarily good and evil; just opposites. And that got me thinking about chess and that got me thinking about another possible game module for Terasology that might fit better with our blocky beginnings than some of the more "organic" concepts we've battered around (like food).

Anyway - what about a world composed of light and dark with "chess-like" pieces? It could be gothic - or not. But I thought that might fit a castle type setting that would go with a "build it, break it" gameplay (knocking down walls/towers, etc.) without reverting to standard medieval fantasy fare. It could also simplify our 3D art assets. Maybe not even have arms or legs to worry about. Chess pieces hopping about might be kinda cool.

Anwyay ... just an idea. Here's a bit of concept art with it. 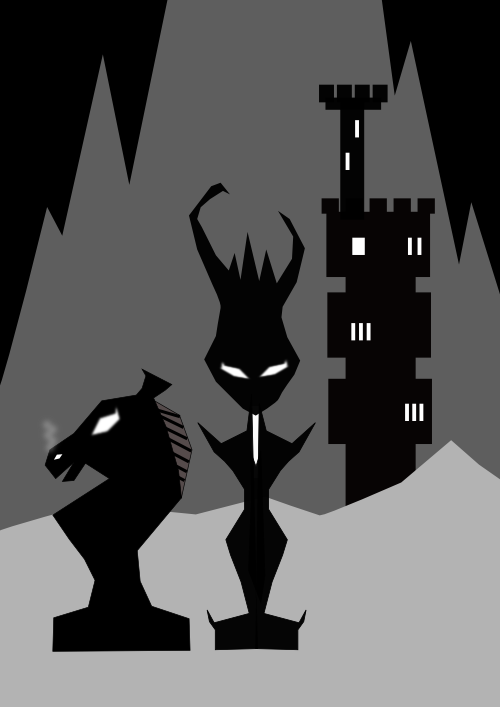 Contributor
Art
I like it, and the concept art, and part of the stylistic decisions kind of derive from it.

Contributor
Design
Art
Thanks glasz. From a 3D modelling point of view I thought this would present a valid stylistic choice to basically "go easy" on ourselves in terms of texturing, rigging and animation. We could start out with basic hops for an animation, just to get something going in-game, and then over time, add cool features like twists and bends to the bodies when they hop, or resting animations like breathing, etc.

Another thought I had was, we could expand the "world" to include other classic game elements. Poker chips, dominoes, jacks, etc. They could perhaps make up "critters" that inhabit the world or be incorporated into vegetation. Poker chip trees, domino fences/walls, playing card bridges or buildings (house of cards).

And again, that might be something that grows over time ... 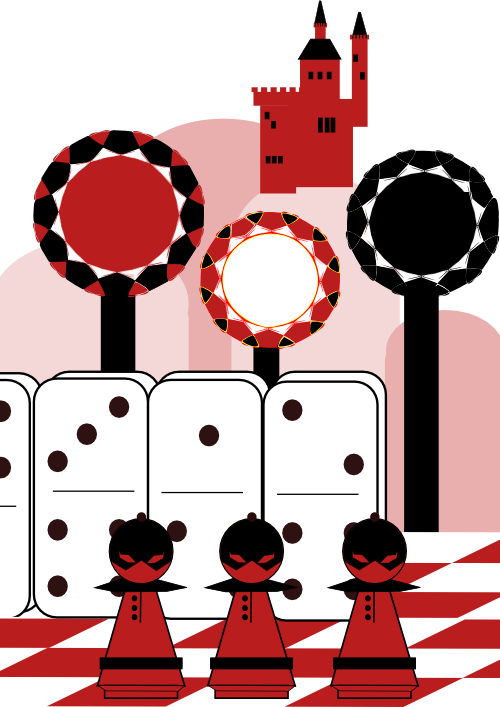 Contributor
Architecture
GUI
Reminds me of this a bit. Not in a bad way.

A first animation (not easy to figure out how these little people move ) :

Contributor
Design
Art
glasz!!!! AWESOME! I never expected to login and see a 3D model that was already textured and animated. You made my day!

I absolutely love how he moves - that's exactly what I envisioned in my mind.

Immortius said:
Reminds me of this a bit. Not in a bad way.
Click to expand...

I kinda dig the 8-bit soundtrack, that was pretty cool 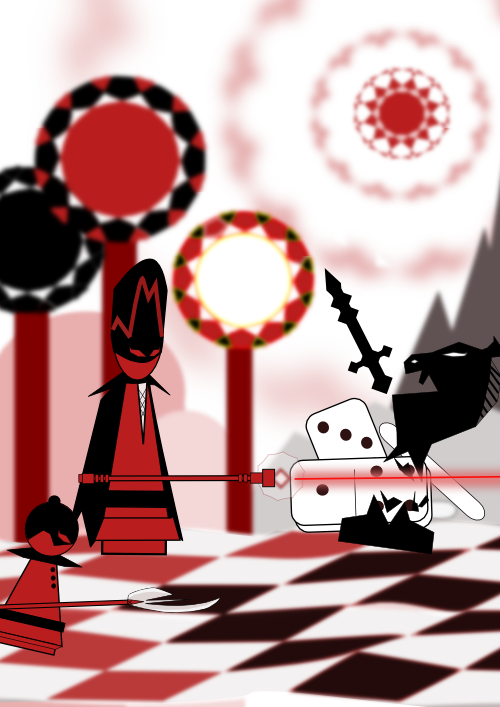 I love it. Love the way he "gallops" and hangs a bit longer mid bounce. A lot more "horse-y".

Really cool glasz, it's awesome to see these in 3D.

I'm going to put together a "character sheet" of the major chess pieces; then maybe try to come up with some critters. Any thoughts on what good game pieces might make good animals?

Contributor
Design
Art
I'm still working out the Rook character, but here's the Red Knight, Red King, and Red Queen. I'll make the Black side's characters distinct from Red's. The knight may be closest in appearance, but notice the Red Knight has a tail, thinner legs, a jagged mane, different chest, etc.

I've also included a possible "weapon" for each character. The "staff" type weapons are magic and would be projectile types. Since the Queen is the most powerful piece in chess she has both ranged and melee capability (dagger and scepter). 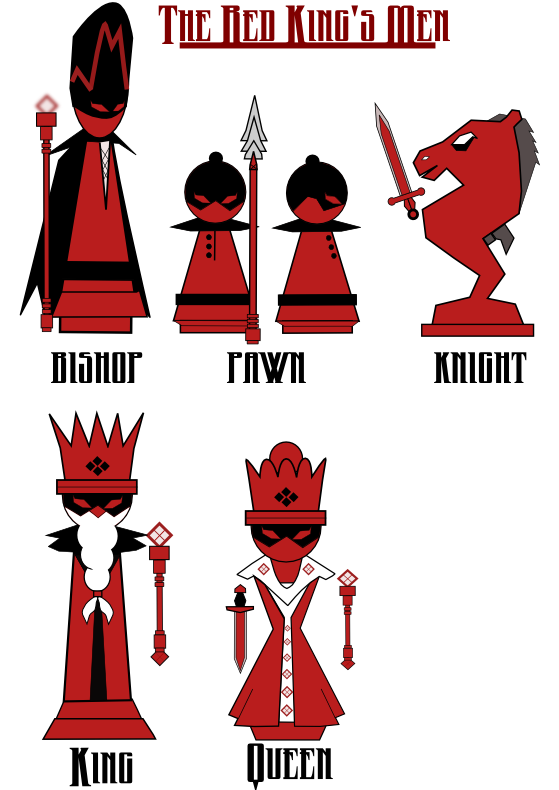 Contributor
Art
I wonder : since they have weapons, could they have hands (in the detached limbs fashion ) ? It's not a necessity of course, i leave it to your decision SuperSnark . Otherwise you asked what piece could make a good animal, i was figuring the rook might be some mix of tower and elephant. That is just in case you dont have a specific idea yet.

Contributor
Design
Art
I'm not opposed to having detached hands, that may work nicely. Maybe they only "appear" during combat or other uses and "hide" during movement or when not needed? For the Red team, perhaps a more "solid" hand design and the black team a thinner, more angular one.

I was researching the Rook and saw all the chariot and war tower references; so I agree that an anthropomorphized tower of sorts is in order. I was thinking rock golem originally, but I love elephants and it fits the history of the piece:

"By the year 1527 Vida, bishop of Albay, published a poem about a chess game between "Apollo" and "Mercury". The rooks were fortifications on the back of an elephant. The European chess players took over the description. Finally they left out the elephant for the normal use."

About the hands : the way i figure things i will use invisible bones that would make some kind of invisible arm for the piece to hold the weapon, so the hands are not actually needed, and yes they can appear/disappear depending on use...but they could add to animated expressivity

Contributor
Design
Art
Sounds cool glasz! Maybe you can do a test animation weapon swing and see what looks/works best. =)

Contributor
Art
ok 'ill do that

Contributor
Design
Art
The idea of the Realm is that the world is actually a game board with corresponding sides.

Each team could try to capture either an object, person, or some other source of power from the center of the realm - that might give their team a bonus or be the ultimate objective.
The "biomes" would somewhat parallel each other, offering possible resources for crafting if we wanted to include that as a gameplay element (token/backgammon = wood; crags/billiards = stone). And of course each biome is based on a classic game (cards, dominoes, billiards, etc.)

It would be cool to have mini games related to the classic game elements.
Players would start the game by choosing a side. Both would be balanced although there should be some degree of uniqueness to differentiate them.

Players could either possess any of the characters on their side and directly control them; or, we could create a unique avatar for the player character with it's own properties apart from the standard characters; or a combination of the above.

We could eventually make the Realm a square or cross, adding 2 additional factions (to start with, I think 2 is plenty though!!)

You can fall off the edge of the "world" as it's flat.