Contributor
ahh and I can't stop playing around...
Added floating islands...at least a simple concept to keep me occupied. Now some waterfalls from the islands down into the canyons would be epic . Actually I should learn for an exam but somehow this got me hooked up
Btw @Cervator , should I post such updates in a module thread now?

Contributor
Art
World
SpecOps
this is what it looks for me now: 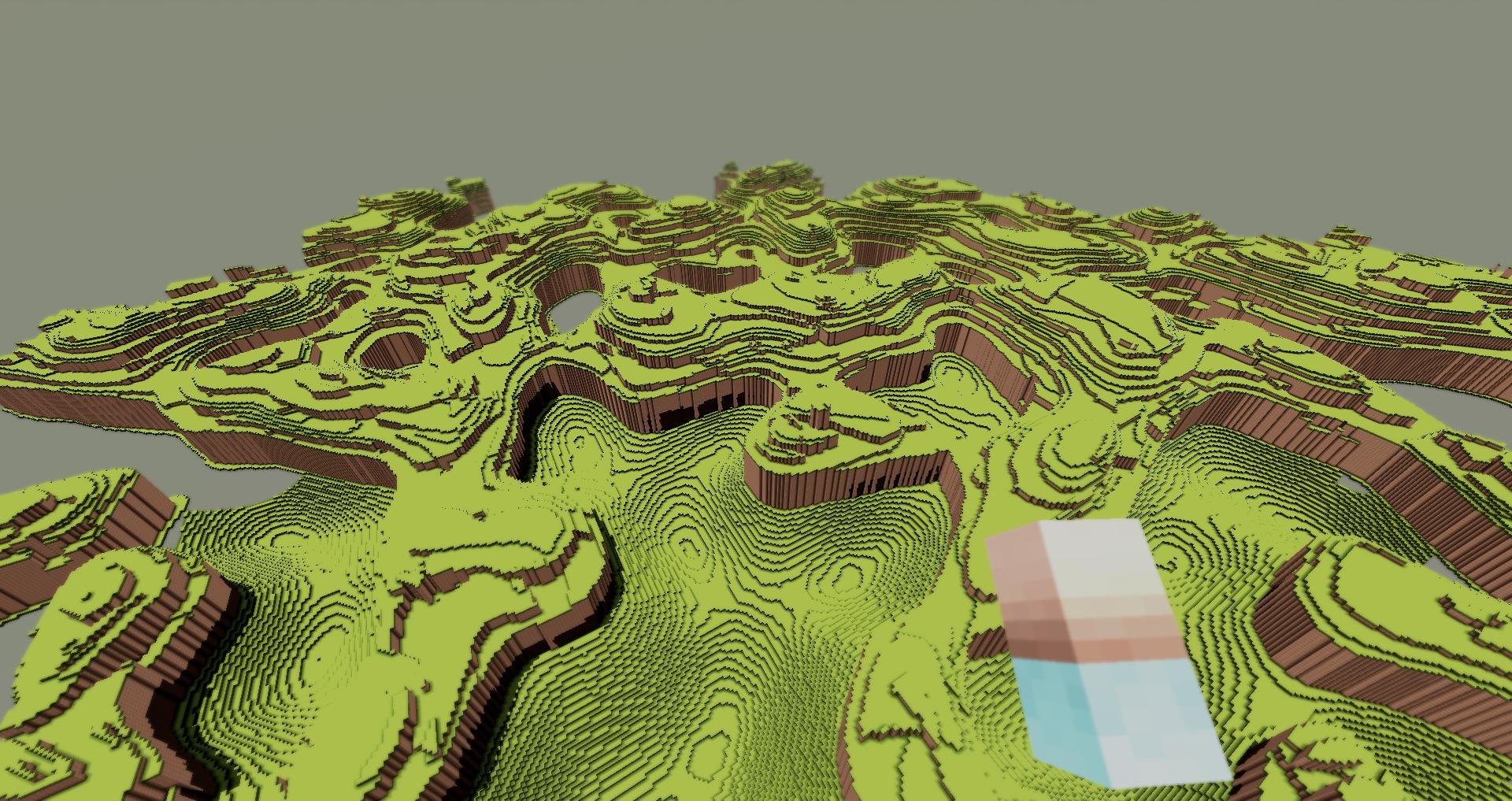 I'm not sure about the intended behavior and I'd like to discuss it on GitHub. I think the idea proposed by @Josharias is exactly what you "want" to do when applying filters to SurfaceHeightFacet.
-- Skaldarnar

Contributor
Design
Logistics
SpecOps
@Cpt. Crispy Crunchy Actually the goal of Suggestion threads for modules is to simply move the thread into Modules when there's enough implemented to consider it working Let me know when you think it is stable enough to play with (doesn't really have to have a purpose yet) and we can add it to the lineup and move this thread.

(Moving the thread is optional, making a new thread is OK too then we just close this one)

Edit: Jenkins job now at http://jenkins.terasology.org/job/ShatteredPlanes
Last edited: Mar 27, 2016
I link, therefore I am. I tweet, therefore I work. Rainbow collector, undaunted optimist, organic search bot, and crazy idea guy. Will give serious thought to anything at least once. Do feel free to disagree and express productive counter views, in public or via convo, any time!
C

Contributor
New Update!
Now with oceans and beaches, reworked canyons and simple biomemechanics
Skyislands should now become bigger the more you walk away from spawn. Though they are a bit chaotic at the moment but I like it that way

I moved the thread into Modules and adjusted the header + module link. I pushed the latest from the secondary branch back to master so it would get built and shipped with the game. Seemed stable enough. Should be in the latest Omega package now!

Very cool world, I love how the islands are sporadic and keep going up, rather than just the standard sort of fractal everywhere. Same for other features. Bit hard on the CPU for me but FPS stayed pretty good, just sent all 8 to 100%

Suggestion: maybe consider a way to code the distinct features as world gen plugins. @Josharias did that with Caves which you can enable in a regular world like Perlin and the caves will appear there. That's part of the goal with our flexible world gen architecture. Heck the caves even have config options that become available for the world when enabled! Bet you could eventually do the same with Canyons, SkyIslands, etc in their own module repos so they could be used in isolation in other worlds, with ShatteredPlanes becoming a central example module with a dependency on the feature modules. That's entirely an extra right now, keep having fun as you are, just highlighting some future potential
I link, therefore I am. I tweet, therefore I work. Rainbow collector, undaunted optimist, organic search bot, and crazy idea guy. Will give serious thought to anything at least once. Do feel free to disagree and express productive counter views, in public or via convo, any time!
C

Can I ask what cpu you are using?
As I run this on my linux i cant use my dedicated gpu and therefore cant judge performance .
Btw this could propably run much faster if there would be a way to use gpu for vector/matrix calculations. I imagine it to be a big challenge though. The reward would be great however.

Skyislands could easily be a standalone plugin, ill take it on my todo list .
Canyons however have to manually adjusted for core biomes as I use a slightly different approach for that.

However next up will be rifts to create uh well shattered planes . I imagine the skyislands as bridge between those planes. Should be done quickly

I have an ancient Core i7, looks like a .. 920? Really old. 2008-2009ish I think. Yeah we could definitely take advantage of GPUs more, it is on the list somewhere, and if it isn't somebody just didn't update the list yet! I can't check as I don't know where it is or which one it is .... we have a lot of lists, is what I'm saying, and they aren't all written down
I link, therefore I am. I tweet, therefore I work. Rainbow collector, undaunted optimist, organic search bot, and crazy idea guy. Will give serious thought to anything at least once. Do feel free to disagree and express productive counter views, in public or via convo, any time!
C

So new update is out: https://github.com/Terasology/ShatteredPlanes/tree/master
Featuring:
-Rifts inbetween land which are sporadically filled by skyislands which will serve as bridges between the shattered planes:

Also the border bug is finally out of the world, so no more ugly edges between chunk borders

You have to wander sometimes for a bit longer to find rifts/skyislands. I aim for bigger biome sizes thats why the map can seem a bit boring now and then.
Will hopefully change as i add new biomes
C

Contributor
Support for simple biomes added. Just copied the stuff from the coregen.
Now there are finally some plants, trees and diversity
Still have to find the vines though. I only read rumors in the L&S module repo about them but they don't seem to be implemented. If someone know where I can find them it would be appreciated

Contributor
Art
World
SpecOps
I "think" vines are just a texture yet if they are there at all. there should be a block shape which could be used for vines (or flags like in L&S), but I don't think anyone has ever generated them in a world.
-- Skaldarnar

So a vine block would just be a texture applied to a .block using that shape

Same thing behind ladders, I think. You could probably just use a leaf texture or something as a stand-in.
I link, therefore I am. I tweet, therefore I work. Rainbow collector, undaunted optimist, organic search bot, and crazy idea guy. Will give serious thought to anything at least once. Do feel free to disagree and express productive counter views, in public or via convo, any time!
C

Contributor
Ok the banner thing will have to do for now . At least I can figure out then how I'll place them while somebody hopefully someday makes a vine texture .
C

Contributor
New Update!
Added mountains and caves. Screens are found inside module repo
Now only ores are missing and it would be playable.
Will probably leave it at it is now for some time, as there are others things waiting to be done like writing tests for worldbuilder fix, updating worldgen tutorial and delving a bit more inside existing code...
I hope I find some time for the vines inbetween .

You could probably plug in the existing ore generation too, I think that can be custom tailored to what stuff you want to generate in the world, where.

Since JoshariasSurvival requires a few ores yet still uses the plain old Perlin world maybe if you enabled some of the few extras from there (mainly the ores, then a few things like seeding small rocks and blueberry bushes) it could actually be an alternative world selection you could play in! Including a windmill standing on the edge of a floating island with a waterfall driving a pump adjacent!
I link, therefore I am. I tweet, therefore I work. Rainbow collector, undaunted optimist, organic search bot, and crazy idea guy. Will give serious thought to anything at least once. Do feel free to disagree and express productive counter views, in public or via convo, any time!
C

Contributor
Added to my todo list @Cervator!
Ores and berries should be no effort to implement, I gather .
I agree, the world definitely needs some skyisland and normal lakes! Just a matter of time till that happens

Contributor
World
SpecOps
Heyo @Cpt. Crispy Crunchy , I took a look and saw that you have made a strong dependency on the caves module. Instead of that, you could use the plugin system for world generation to let it happen auto-magically. This has inspired me to write the next page of the world gen tutorial. Hope you find it helpful: https://github.com/Terasology/TutorialWorldGeneration/wiki/1.x-Plugins

Contributor
World
SpecOps
Excellent, got JoshariasSurvival working with ShatteredPlanes! (https://github.com/Terasology/ShatteredPlanes/pull/1) Here is a lone windmill in the middle of a rift.

Contributor
Hey nice work @Josharias! It feels good to see my worldgen put to use .
Also thanks for the tutorial it was easy to understand and saved me code reading time .
I added my own small share to the tutorial now, I hope someone can find it useful, although its not much at the moment: https://github.com/Terasology/TutorialWorldGeneration/wiki/Common-errors-you-can-avoid
I will add any more bugs which I think others could stumble upon too.
I'm also thinking about writing some stuff about filters, but not sure if there's need.

Anyway, now up to some lakes!

Contributor
World
SpecOps
Thanks for the wiki page. I plunked a link on the home wiki page.