Contributor
Art
World
SpecOps
In an attempt to make the forum use handier Cervator and I discussed the use of thread prefixes (as provided by Xenforo) and labels. These can be used to give a better overview of threads and group them by categories/topics.

The current plan I worked out looks like follows:
The prefixes I came up with, grouped by sub-forums, are the following:
Discussion about this is wished-for
-- Skaldarnar

Contributor
Art
World
SpecOps
A first use-case I tested can be seen in the Support section, namely applying the "Solved" prefix to a thread

Contributor
Design
Logistics
SpecOps
Thanks for taking the initiative to start this - been on my list on a long time. Am eager to dig in and apply some stuff and come up with more, but still uncharacteristically swamped. Soon(tm)!

Definitely also relates to general forum organization like incubator vs modding, modules vs game modes, etc. Fun stuff for logistics types, borderline bike-shedding for others, wee!
I link, therefore I am. I tweet, therefore I work. Rainbow collector, undaunted optimist, organic search bot, and crazy idea guy. Will give serious thought to anything at least once. Do feel free to disagree and express productive counter views, in public or via convo, any time!

Are you collecting badges? Can we call you a "badger" then?

Marcin Sciesinski said:
Are you collecting badges? Can we call you a "badger" then?
Click to expand...

But possibly one badge would be easier
-- Skaldarnar

Contributor
World
Architecture
In that case, I want a "modder" badge

Contributor
Design
Logistics
SpecOps
Skaldarnar - Oh hah, I didn't even realize I hadn't thrown Logistics at you yet

Marcin Sciesinski - in the beginning I made "World" to cover both world gen and world content, back when we didn't have much mod/module action going yet. We need a "Modder" badge for sure. Pinging SuperSnark

Although I had sort of thought "Modder" would indicate a more loose affiliation with the "team" badges being a specialty among core project contributors. Bikeshedding badgers hooooo!

(I suppose you could actually be both a modder and a contributor, although that seems a tad superfluous !)

Edit: Skaldarnar we need to get you a custom title one of these days! And Marcin you've got one now let me know if you prefer something else

Later edit: Came up with a title for Skaldarnar that as a bonus made the mini profile even longer, teehee
I link, therefore I am. I tweet, therefore I work. Rainbow collector, undaunted optimist, organic search bot, and crazy idea guy. Will give serious thought to anything at least once. Do feel free to disagree and express productive counter views, in public or via convo, any time!

Contributor
Art
World
SpecOps
Perfect, that should be enough for the moment Maybe I should start working on 3D-wizardry....
-- Skaldarnar

Make forums more on topic - one module one thread, one engine feature one thread, anything beyond that goes elsewhere
With more exact forums we can develop more exact thread prefixes plus tie each thread (for engine features and modules at least) to a wiki doc page (engine) or module repo/readme
I link, therefore I am. I tweet, therefore I work. Rainbow collector, undaunted optimist, organic search bot, and crazy idea guy. Will give serious thought to anything at least once. Do feel free to disagree and express productive counter views, in public or via convo, any time!

Contributor
Art
World
SpecOps
After some discussion about new (sub) forums and organization I came up with the structure given below. Most important, the Development sub forum is reworked to be more specific about thread contents. Ideally, each thread will have an automatic updated copy of github README.md or similar in its first post.

I've put possible thread prefixes behind the subforum entry ([prefix1, prefix2]), and gave some examples for threads in the categories. (Sub) forum entries start with a »+«, threads with a »*«.

Modules (in the sense of mods) live in a separate subforum as game types. This way, we can decouple overall gametype discussion from specific module implementations.

Contributor
Logistics
I like it, except the forum "Long Term Planning".

Contributor
Art
World
SpecOps
I corrected the indetation a bit (was off for the last entries under »Administrative«). @mmkalbdo you have suggestions where we should discuss alpha/beta milestones and other »long term planning« (don't know, but Steam Greenlight and co came up once or twice, as well as other crowd funding sites).
-- Skaldarnar
M

Contributor
Logistics
I would add an "Off-topic" or similiar to "Community".

And I would move "Long term planning" under "Development" (not "Administrative"). But this is only my suggestion.

What is the intention of "Core Team Discussison"?

so I think it makes sense to try to merge the topics into other (sub) forums.

"Off-topic" might be useful, although I'm not really sure for what. Maybe non-Terasology related announcements could go there, although they fit into "General" as well. Would it be an option to just take "General" as possible "Off-topic"?

Contributor
Design
Logistics
SpecOps
Mega-post powers active! Gathered up existing drafts and ideas including from the recent office hours. Consider this a meaty draft needing a few more tweaks then maybe this weekend after office hours we can finalize and start applying the new design.
Overarching goal: Make forums more on topic - one module one thread, one engine feature one thread, anything beyond that goes elsewhere. Funnel general / starting stuff into specific forums and promote from there if needed. New forums show up naturally when there's enough activity to justify one.
Prefixes included below consider a focus on forum / development status instead of logical categorization as that doesn't generally change and might be better indicated by the actual forum the thread is in and/or a header in the top of each thread (which in some cases can be automated, like module type parsed from module.txt by Jenkins. Maybe this could be injected into the thread title like a secondary static prefix)
Community: General stuff including off topic. No heavy dev topics here, although the Suggestions forum is sort of a gateway drug to development

Development: Heavily related to code and assets directly used in Terasology and immediately related projects. I'm still leaning towards "Site & Services" staying outside this block as that stuff is more peripheral to actual Terasology dev (which is why it is under "Administrative). S&S is sort of about the stealthy logistics behind everything that most don't need to worry about.
International - same as current, maybe some sticky improvements with translation framework info? Especially when we, you know, have a translation framework (for the main game and everything other than the shiny launcher) 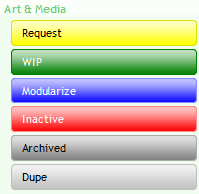 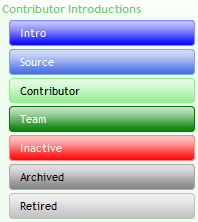 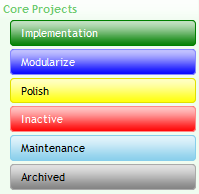 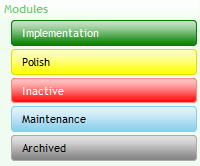 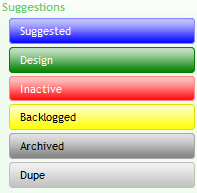 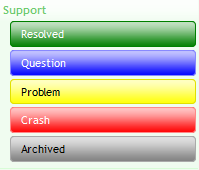 Feedback? Now we just need to start applying them and moving threads around, which will take much longer, woo. Probably will be me and Skaldarnar doing it over time but feel free to help out if able. Still need to update some stickies to explain as well.

Edit: Added "Resource" for art (light blue) since not everything there necessarily either leads to a game asset or archive/inactive

Edit Sept 30: Changed "Polish" to "Tweaking" to be less confusing on an international project. Plans for "German" tag delayed indefinitely.

Edit March 16th 2015: Added "Project" prefix in orange to Modules and Core Projects, which itself I plot to rename simply to "Core" to cover everything central not a module. A "Project" is meant to be a time limited topic that will later be archived as complete rather than stick around as documentation. Likely it'll result in updates to other permanent threads during its execution. Example: An "Alpha" phase push for a subset of functionality.
Last edited: Mar 17, 2015
I link, therefore I am. I tweet, therefore I work. Rainbow collector, undaunted optimist, organic search bot, and crazy idea guy. Will give serious thought to anything at least once. Do feel free to disagree and express productive counter views, in public or via convo, any time!
You must log in or register to reply here.
Share:
Facebook Twitter Reddit Pinterest Tumblr WhatsApp Email Link
Top