Track your contributions on OpenHub

I was reminded the other day of OpenHub, which I find to be a fun way of keeping track of which projects I've contributed to. I thought some of you might enjoy it too, as you build up your own history of contribution, whether it be through a Code-In or Summer of Code or your own initiative.

OpenHub builds charts of which projects you're involved with, and scans the source repository to show when you made commits and what programming languages they were in. If your contributions are of the sort that don't show up as git commits (like manual testing, user support, translation, or marketing), you can add those to your profile too, though it's not automatic.

and if you've committed recently you may be able to find yourself in the list of contributors and click the "Claim Commits" button. 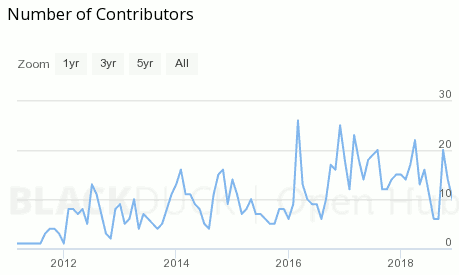 Those of you who have been around a while might remember this service as "Ohloh"; the name changed in 2014.

Tereasology has a whole lot of separate repositories, and they're not yet all registered under the Terasology OpenHub project. I did add one of the github.com/Terasology repos in there (for purely selfish reasons) in addition to some of the core github.com/MovingBlocks repos that were there already, but maybe those should be kept separate, for the same reasons that the GitHub organizations are separate. Let me know if we should split that out again.
You must log in or register to reply here.
Share:
Facebook Twitter Reddit Pinterest Tumblr WhatsApp Email Link
Top