Who?
-> All interested community members. Server will be private so leave a message if you want to participate.

What?
-> Launching a rocket to space, then another, then infinite science, then crazy mining ... you get the idea

Why?
-> Having fun together and building things together, as we always do

Setting?
-> Default Factorio, probably a 16.x beta branch, no mods, default game with a bit more resources because we all like to build big .

Contributor
Architecture
Server is up and ready for tomorrow, we have a nice little spawn area with almost no stone but some oil

Note that the server is running 0.16.30 Beta, you will have to select the appropriate version.
For example on steam, open the game properties, then select the branch in the "Betas" tab:

I will open the server Saturday morning, UTC+1, likely in 14-16 hours. Write me on the forums or ping me on slack for connection data.
Looking forward for some nice coop-factory-building

Contributor
Design
Logistics
SpecOps
I just picked up the game to be ready for tomorrow, just will have no idea what to do. Know of the game, of course, but no time to play it so I've resisted so far

How does the multiplayer work? Do we each build on the same base? Shared resources? Or is it more of a go make your own base then send materials back and forth as needed?

Edit: Oh, and I'll probably be late / playing part time now and then. In an odd twist of fate I have possibly as many as three separate game events to attend Saturday ... which is something since I barely even play three games at all.
I link, therefore I am. I tweet, therefore I work. Rainbow collector, undaunted optimist, organic search bot, and crazy idea guy. Will give serious thought to anything at least once. Do feel free to disagree and express productive counter views, in public or via convo, any time!

Cervator said:
How does the multiplayer work? Do we each build on the same base? Shared resources? Or is it more of a go make your own base then send materials back and forth as needed?
Click to expand...

All on one factory with shared resources, tends to be a fun/chaotic mix.
I will send the server login around, lets see what we can build over the weekend

Contributor
Architecture
Actual state of the map and a list of noteworthy points: 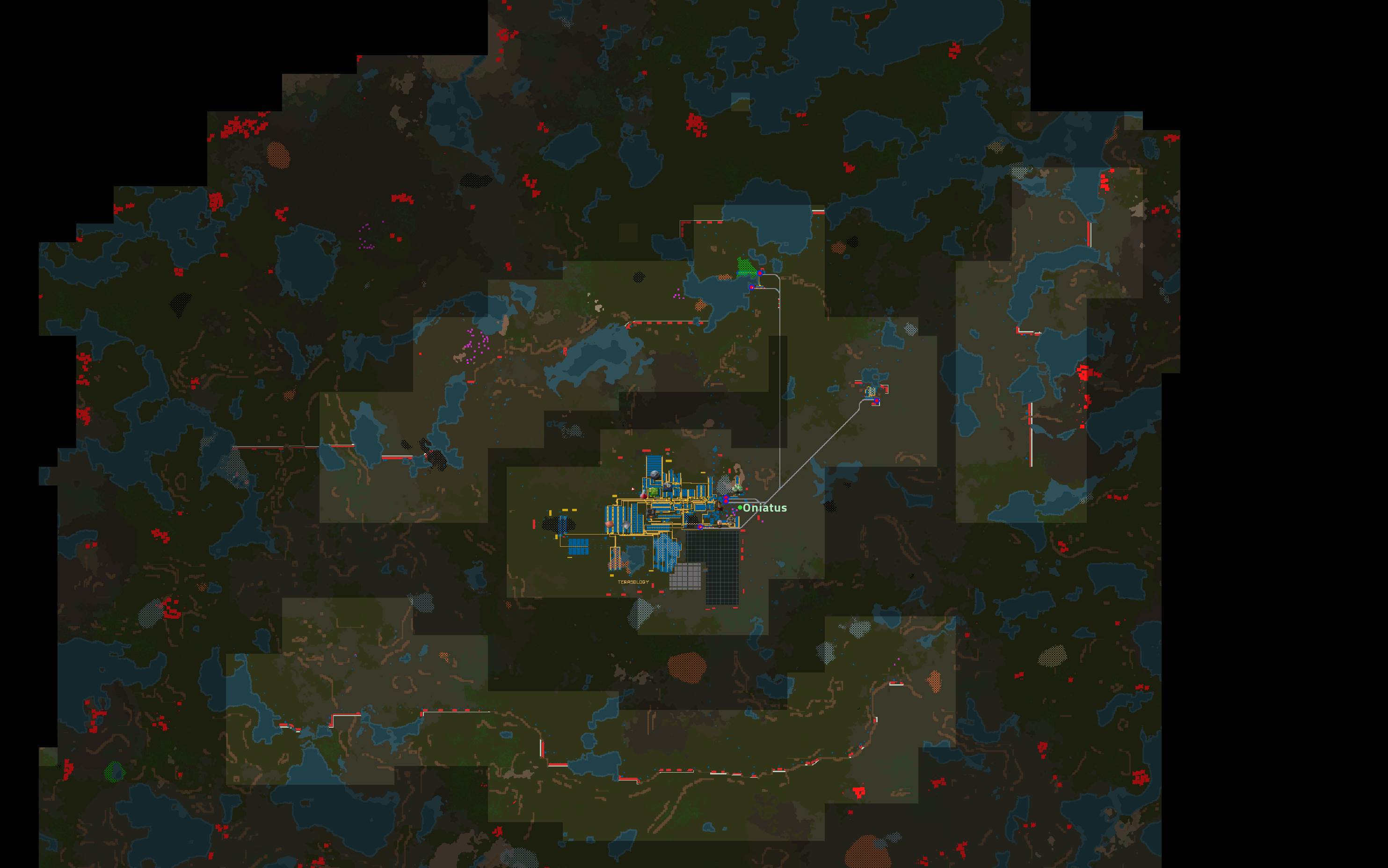 I will leave the server open for ~24 hours (~ Monday 9PM UTC+1), then take a savegame and also share the savegame here.
I would also use the savegame to continue on should I repeat the event in the future

Thanks to @Cervator @Michael @jellysnake and @MandarJ for stepping in (and everybode else who I may missed), think we had a good time

Oh great I missed it... Should probably read these forums more often

Contributor
Architecture
I will announce once we repeat it and with more time ahead then
Last save game, latest version is 0.16.31 due to a recent patch:
https://www.file-upload.net/en/download-13037414/terasology_event_1.zip.html

Contributor
Architecture
Small reminder for everyone interested in the game who does not own it yet:
The price of factorio will change from 20$ to 30$ at 16th April (https://www.factorio.com/blog/post/016-price-change).
It is still pretty cheap for the amount of gameplay the game delivers but as the game has a no-sale policy I would recommend to grab a copy now instead of waiting for a sale forever

Contributor
Design
Logistics
SpecOps
I've been slowly working through the single player campaign. Interesting stuff with some occasional awkwardness / lack of intuitive controls. Think I'm beginning to get more the value of the two different sides of conveyor belts but I still haven't found out how to get an item off my cursor without showing it back into the toolbar, ideally where I got it from since otherwise I'll just pick something else up. Wish right click would just clear
I link, therefore I am. I tweet, therefore I work. Rainbow collector, undaunted optimist, organic search bot, and crazy idea guy. Will give serious thought to anything at least once. Do feel free to disagree and express productive counter views, in public or via convo, any time!

Contributor
Architecture
"q" for clearing or picking like a pipette tool, "ctrl" for fast grab/insert and "alt" for enabling the ui overlay are your best friends ingame

I personally do not like the new pipette tool on q, it was better as weapon switch if you ask me. Good thing you can rebind everything.

Contributor
Architecture
I think I will start another server for this weekend, maybe with peaceful settings this time for more building and less turret creeping
Begin will be probably in 14-16 hours from now.

Contributor
Design
Logistics
SpecOps
I managed to connect, version this time is 0.16.38, pick under Betas

Nice map!
I link, therefore I am. I tweet, therefore I work. Rainbow collector, undaunted optimist, organic search bot, and crazy idea guy. Will give serious thought to anything at least once. Do feel free to disagree and express productive counter views, in public or via convo, any time!

Contributor
Design
Logistics
SpecOps
That was fun, thanks for keeping the server up a bit longer than expected

Wish I had taken some screenshots to remember how some of the things worked. Those main conveyor belts were very impressive and I still have no idea how the computerization to make alerts when they ran low worked. Did the rocket get launched? I did manage to place a silo near the end. And research nukes, but not try one

This time I was comfortable enough with the basics to add in a bit here and there, not that my contributions amounted to much compared to the massive "spaghetti" Oniatus and Sigma (and anybody else?) were able to add in. But I understood the concepts and was able to add to capacity and fix things when needed, unlike last time when I could pretty much just stare at the madness

Some observations this time on Factorio in general: it does what it does really well and is an impressive project. Super cool to play if its focus is your niche, as I'm sure the fans of making giant factories in Minecraft would agree to, since I believe that's where it came from in the first place. Although some of the UI / hot keys are still a bit strange to me, and the variety seems to thin out relatively quickly in the base game (I'm sure mods add a lot more)

One thing I noticed in particular. In my single player game I reworked my approach to using belts and inserters a couple times, and by the time I managed to get one train and a refinery going I had pretty much settled on having to do a set of "main belts" that would be 100% dedicated to one resource each and then allowed to fill up to where production/refinement would stop as the belts were full. Then update belt speed as needed to fit more (which I ended up doing some on the server). Had started poking at that by the time this event began.

Less than 24 hours later that's what Oniatus and Sigma had built in glorious fashion. Talk about validation of my theory. Yet it seemed relatively obvious after even just a few hours of solid play, and I hadn't really thought of any alternatives and still can't really see any. Yeah you can replace some stretches with trains but that's more or less the same concept. Is that ... it?

Not to pick on Factorio or anything, as said it does its thing really well (and I'm especially impressed with its stability and automated testing) but where Minecraft seems like a shallow sea Factorio seems like a deep pond. Pretty soon it seems like you need to invent your own challenges or work with maps/settings that are weirdly constrained in some way. While our server this time was on peaceful I'm now playing with every difficulty maxed yet don't really expect trouble. I hope to be surprised and maybe mods exist that can make the next round radically different

Conversely something like Dwarf Fortress seems more like a deep ocean, only the water is weirdly low detail and kind of ugly, oh and it is poisonous and full of piranhas that somehow enjoy the poison. Plus you're totally alone since there's no multiplayer. It was fun putting out small capacity-related fires in Factorio but that seems like it outside of self-challenges after you've trivialized resources (which happens fast). In DF a lot of different things tend to be on fire a lot of the time Although that in the end can often end up leading to overly micromanaging everything and slowing down time to a crawl.

I'm very curious what sort of gameplay systems we will end up with eventually to both maximize potential "width" and "depth" of our content.
I link, therefore I am. I tweet, therefore I work. Rainbow collector, undaunted optimist, organic search bot, and crazy idea guy. Will give serious thought to anything at least once. Do feel free to disagree and express productive counter views, in public or via convo, any time!

I'd say after getting through vanilla, install the bob's mods. Or mine . Or even both if you can deal with some weirdness. There's also Angel's mods for a whole new thing.

Contributor
Architecture
Here is the save if you need a second look https://ufile.io/zgn6i

Agree on the challenge thing. There are different kinds of challenges in Factorio worth a try. SpaceX Plus would be a resource-megabase challenge (our current base would not even count as starter base), angel or bobs are a complexity challenge.

Contributor
Design
Logistics
SpecOps
Been slowly playing along in my single player game, at highest diff and slowest speed. It did bring some challenges while learning, like being surprised that the gun turrets couldn't hold enough ammo to fight back larger waves of critter later, despite having a well-fed ammo belt. Figured out a chest-buffered system that helped, my first blueprint, yay.

Still, while I haven't quite trivialized the map yet it does seem like it is getting near. Haven't even gotten a tank yet Have tried avoiding bots and laser turrets but flame thrower turrets and a slow push into enemy terrain to acquire more resources seems good enough on its own, just somewhat time consuming.

I started looking at the mods and the Bob series seems to fill the top by download count. I like current functionality just fine, just feel like it needs more, like more minerals, which seems to be in the Bob mix of things. More warfare also sounds good, I might even get my wife tempted into trying it if there are more weapons and baddies.

Just grinding deeper on its own with the current setup seems kinda meh, but expanding the game complexity is always nice. Are there any prepackaged "mod packs" or nice lists a la Skyrim? Or do I just go grab everything with "Bob" in the name? How stable is the game with even just one line of mods enabled? Sounds like I might need to lock to a given game version for a while, which is okay.

The mod browsing seems somewhat like ours (a bit further along of course), lots of stuff but more raw data than curated information.
I link, therefore I am. I tweet, therefore I work. Rainbow collector, undaunted optimist, organic search bot, and crazy idea guy. Will give serious thought to anything at least once. Do feel free to disagree and express productive counter views, in public or via convo, any time!