After playing KeeperRL, I realized that our current interface, copied from Minecraft, really leaves much to be desired for managing anything other than yourself.

So I shamelessly copied the interface look and feel from KeeperRL and am customizing it for our own needs as a starting point. This module will provide just the interface, leaving Miniions and other modules to implement the actual do-something-stuff. This also frees Miniions and other dependent modules from constantly trying to keep up with the latest UI changes. Instead, alternate UIs can interact with Miniions and compete for the title of "Final user interface". That, and I know that I'm more than capable of taking a good interface and ruining it, but at least we'll start off on the right foot.

For grins, here's it running under both regular Terasology and AWT: 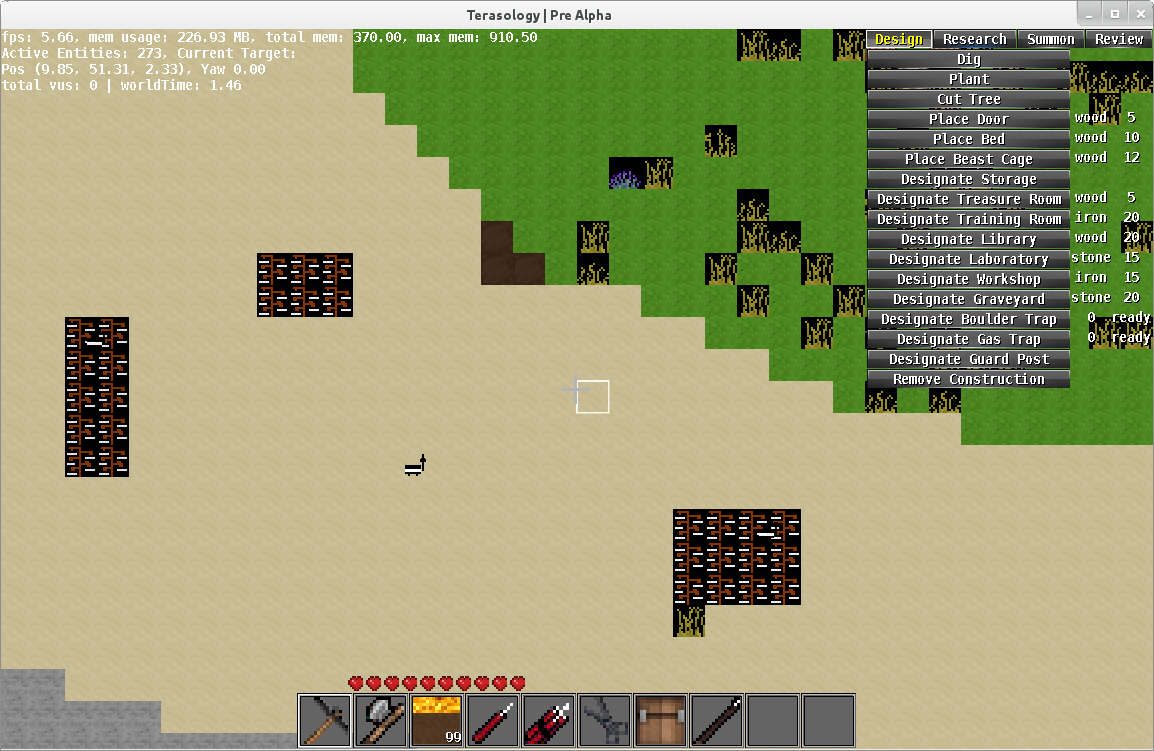 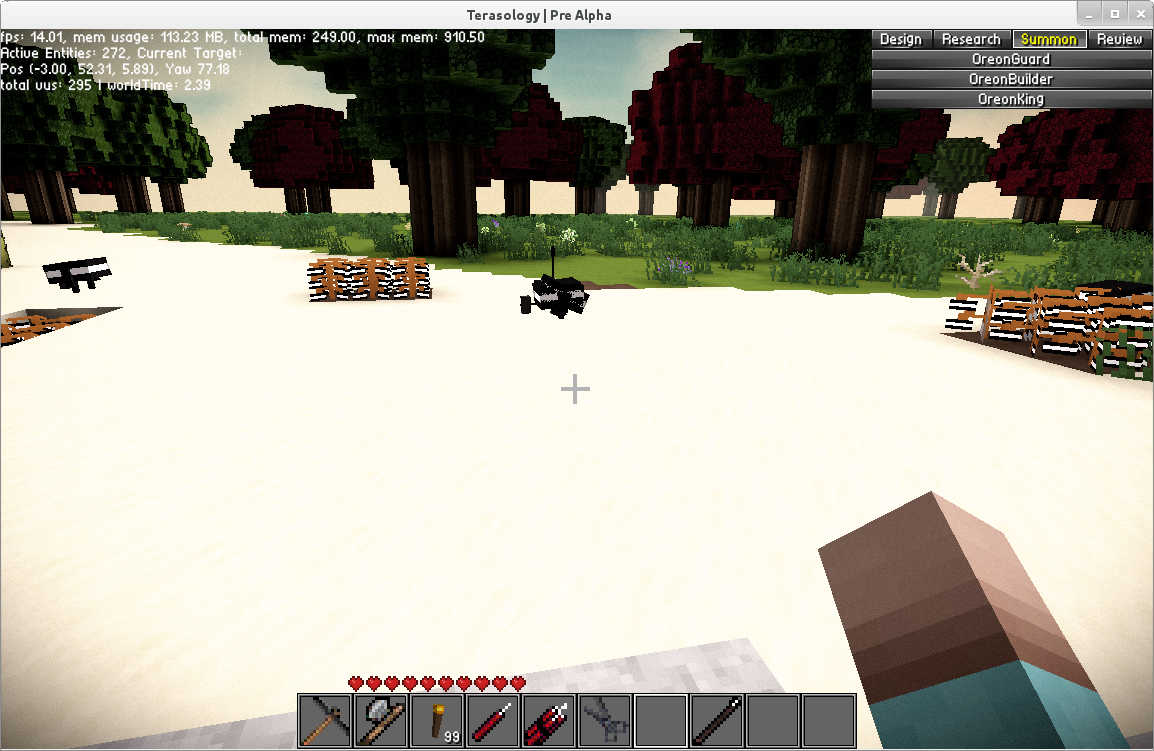 Contributor
World
Architecture
Good news. In the upcoming days I'll be moving "player health" to a separate module and make it optional. I first have to discuss this with Immortius, but I'm sure will be fine with that.
N

Contributor
As evident from the thread's 'Inactive' label, the development of this module has been ceased for a while now, even the Miniion module on which MOO relies is deprecated. So, I would like to take up the task of renovation of this module as a GSoC project this summer. I have put together a draft proposal for the same and would love to get some feedback and suggestions for improvement. The Google Doc version of the proposal is available here.
Last edited: Mar 11, 2018

Contributor
Architecture
GUI
Glad to hear someone is interested in working on it. I'll try to provide feedback and other support as time permits.

Contributor
Architecture
GUI
I've quickly read through your proposal. I think you want to reduce the scope. Many of your one-week tasks seem too large to complete in 25-40 hours. Maybe some of the other developers could also take a look at that?

I will try to find time to comment in more detail later this week, time permitting.

Contributor
Architecture
GUI
Caveat: I have not done anything with Terasology in several years. I don't know what the current state of the engine and modules are.

Here are some thoughts about your proposal:

Behaviors for creature models and animations.
Click to expand...

I would recommend you focus right away on learning what the Behavior module is capable of doing, and suggest you do this before you finalize your proposal. Behavior is going to be the system that makes or breaks your project, and will determine where you need to allocate your time. It was in its infancy when I stopped working on Terasology, so I don't know what the current status is.

Scenario for marking regions and attaching them to specific events in the village.
Click to expand...

It's not completely certain to me what you're hoping to extract from Scenario (not previously familiar with that module and it doesn't seem directly applicable to your project from what I am reading), but there used to be code in the engine for selecting and highlighting block selections. I'm also not sure if that's relevent for what you are doing, but it might be a better fit, assuming it is still around.

Use the BehaviorSystem for getting the desired behavior from Oreon like when placed in a region marked for a specific job.
Click to expand...

I think you want to break down this task into many specific subtasks. It is not likely to be something you can do in a single week, especially if you are also trying to do a second task of "Oreon animation changes to fit the ‘scenario’." I would also try to run your specific tasks by someone knowledgeable about BehaviorSystem and see if they think it will work with the current system. Doesn't look like @synopia has worked on it for awhile, but someone new to me (@dkambersky) seems like they have done a lot of work with it recently.

I'm not sure what you are planning to use as the framework for a tutorial module, but that sounds like it could be another project in itself. You might want to try breaking this down into smaller tasks and see if it's really going to be feasible in that timeframe. A video might be a week's work all by itself by the time you decide what you are going to put in it and actually film and edit together all of the footage. @Cervator might have ideas on what's been done for tutorials in the past.

The Scenario module is probably in part a third or fourth round of iterations since the olden days on the concept of marking an area then attaching some significance to it. Light & Shadow had you defining activity zones for creatures like "dig here" or "move there" then Scenario further hooked up event triggers, conditions, and all kinds of fun things. I figured it might be useful for marking rooms and such, although maybe only as sample code to look at to understand how to mark areas and hook up triggers

Tutorials in this context typically involve making a quick demo video and a few wiki pages explaining how to extend a system for a developer - less so a tutorial for helping a player learn to use the game. It still could take quite a while to do really well though!

Awesome to have some more feedback flowing around, do keep it up as time allows, very much appreciated
I link, therefore I am. I tweet, therefore I work. Rainbow collector, undaunted optimist, organic search bot, and crazy idea guy. Will give serious thought to anything at least once. Do feel free to disagree and express productive counter views, in public or via convo, any time!
N

Contributor
Renovation Of Master Of Oreon​
The GSoC 2018 overhaul resulted in many new features in MOO and also made it easier to implement even more. This post summarizes all that has been accomplished and that could/should be done in the future.

Accomplished :
To be done in the future :
So, given the current state of the module a myriad of new content like tasks, buildings, research recipes, resources to collect and potions can be created to ehance the game-play experience.