Contributor
Design
Logistics
SpecOps
Been a long time coming but Alpha 7 has been released! It is fairly stable though it has a few annoying known issues, like food not working right and crouching being problematic in multiplayer. Food & Drink are already way better now in the Omega 704 develop build, which is what we'll be using for the monthly play test starting in about 11 hours from this post.

Changes in Alpha 7 are covered via issues in a milestone on GitHub and via commit messages in Jenkins. Module changes on the other hand ... those there are a lot of too but we don't have a great way to track them yet. All the changes from our participation in Google Code-In 2016 are packaged now, short a few new modules that haven't been added to the lineup yet. Lots of new equipment, effects, potions, plants, and so on.

Initially the "Official Event Host" in-game listed server is running JoshariasSurvival naturally by @Josharias as we haven't tested that for a bit, with a challenge to build a windmill without cheating. I haven't even tried that myself. Wonder if it still works!

Additional modules enabled: Soundtrack vol 1, CheatsForAll (resist! But good for testing), FunnyBlocks, and Fireball. Hmm I wonder what that last one does

This Monday is the student proposal deadline for GSOC 2017 which we also got into. Woo! So far we have quite a few good looking proposals, and could end up in the 5-10 student project range somewhere. It is going to be a great summer! Any students still working proposals better hurry up and start submitting final PDFs soon, don't risk missing the deadline, Google is very strict there.

We might also run a modding contest soon, with, gasp, monetary prizes! Because we have project funds now and aren't quite sure what to spend them on (maybe some code bounties on GSOC ideas that don't get picked, as a second chance for some students?). Thinking $250, $150, $100 in Amazon gift cards for first, second, and third places, with t-shirts for the top 10 if we get some prepared in time. So keep an eye out for that

In other news Rails are also being fixed up again, now with niftier physics!

Will there be some ppl in discord for talking about the play test?
root ~> find / -iname '*base*' -exec chown -R :us \;
# all your base are belong to us, all your base, not just your current.

Here are some screenies:

And around the end of the JS testing I tried throwing ten separate local clients at the server - both local system and server seemed to handle it pretty well! Here's how that looks: 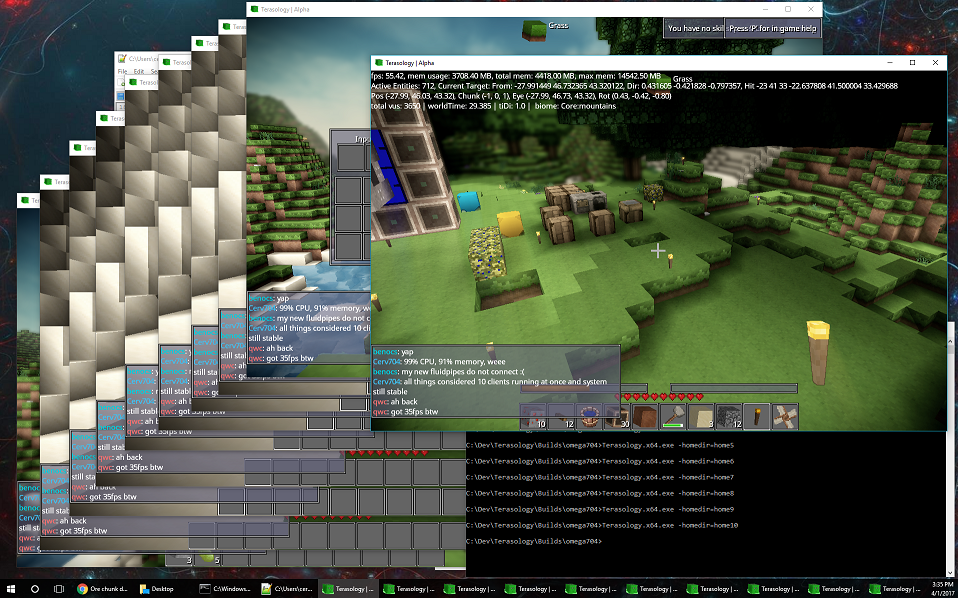 As for the JS testing itself - it went surprisingly well. Even though we haven't spent much effort on it lately there weren't a ton of bugs, thought we'd find more. Will report separately.
I link, therefore I am. I tweet, therefore I work. Rainbow collector, undaunted optimist, organic search bot, and crazy idea guy. Will give serious thought to anything at least once. Do feel free to disagree and express productive counter views, in public or via convo, any time!
You must log in or register to reply here.
Share:
Facebook Twitter Reddit Pinterest Tumblr WhatsApp Email Link
Top