Happy 4th birthday Terasology! Maybe our quest is near a milestone?

Contributor
Design
Logistics
SpecOps
At least we're about to have quests!


Our project's 4th birthday was just recently, about two weeks ago but yours truly here has been slammed with crazy crunch time at my day job. So celebrating a bit delayed here

I've mostly escaped from my responsibilities and cleared the whole coming weekend (Oct 10+11) for a bit of birthday fun. I'll be around as much as possible both days, starting 10-11 am EDT till late evening. Some ideas:
I'll start poking people soon to see how many we get to show up, maybe even some old friends we haven't seen for a while
I link, therefore I am. I tweet, therefore I work. Rainbow collector, undaunted optimist, organic search bot, and crazy idea guy. Will give serious thought to anything at least once. Do feel free to disagree and express productive counter views, in public or via convo, any time!

Contributor
Design
Logistics
SpecOps
Not an hour or two after posting that I naturally hit the first other activity I'm drafted into this weekend, so I might be missing for early Saturday (till noon-mid-afternoon my time). If anybody wants to get anything started early and needs hardware just let me know. I can spin up a beefy game server droplet on Digital Ocean and hand somebody full root access via SSH to set up whatever

For Terasology we have @minnesotags' working server already. It is running latest release as I write this with JoshariasSurvival active (I think) but we've run more than one server on there before to also have latest develop running on a different port.
I link, therefore I am. I tweet, therefore I work. Rainbow collector, undaunted optimist, organic search bot, and crazy idea guy. Will give serious thought to anything at least once. Do feel free to disagree and express productive counter views, in public or via convo, any time!

Contributor
Design
Logistics
SpecOps
Thinking about setting a time of 4 pm EDT tomorrow for a dev meeting (link goes to timer) to talk about engine v1.0.0 just so we have something to aim for. I should be able to go all day after that so no worries about being late, I can keep a log Not that slack-gooey doesn't already do so via Slack

Goal will be preparing new version of the alpha list split into engine v1.0.0 and individual gameplay templates. Or an overall "game" level maturity check (Iota?). A lot of our modules really could be at v1.0.0 as well, that's the point in keeping them tiny. So maybe bump a bunch of them to newer versions. I really need to do the final step of module release management!

When we have a nicer definition (and presentation) of the Iota modules that'll probably help judge better when the "game" is alpha ready. (a nice list showing Iota-only versions and colors for alpha/beta/release a la our meta server) For all I know some individual gameplay templates like JoshariasSurvival already are alpha, beta, or even near v1.0.0 ready
I link, therefore I am. I tweet, therefore I work. Rainbow collector, undaunted optimist, organic search bot, and crazy idea guy. Will give serious thought to anything at least once. Do feel free to disagree and express productive counter views, in public or via convo, any time!

Contributor
Design
Logistics
SpecOps
Felt ever so artistic, so I drew a thing: 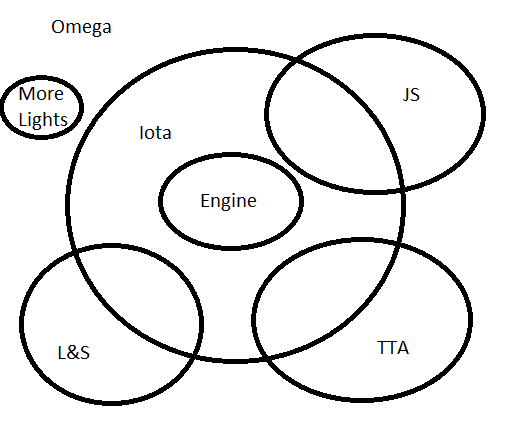 I probably already made something like this in the past elsewhere. And pretend there's a box (or circle!) around the whole thing and that's Omega.

JS, TTA, L&S (and Cities, and so on) have each their own maturity level, but a lot of their utility modules are part of Iota. So as they mature Iota matures. There thus could be three major maturity contexts: engine, Iota, and individual gameplay templates

Some modules are just part of Omega on their own (like the ancient MoreLights module that just contains some arbitrary glowing blocks and plants) so they have less effect.

Edit: Fair disclaimer - GitHub notifications may get a little spammy over the weekend if I get issue / milestone crazy ...
Last edited: Oct 10, 2015
I link, therefore I am. I tweet, therefore I work. Rainbow collector, undaunted optimist, organic search bot, and crazy idea guy. Will give serious thought to anything at least once. Do feel free to disagree and express productive counter views, in public or via convo, any time!
M

Ok, I have the stable 58 version running with the Josharias Survival modules loaded at terasology.tuffkidtek.com.
M

I'm working on setting up the latest Dev version at a different port. I'm guessing josharias modules again, but maybe there are different modules to do? I can allow some ssh access if you email a request to onsite@mngeoservices.com.

Contributor
World
SpecOps
I think I have tentatively cleared some time with the family at 1400PST for Terasology. Possibly could we do an update before we all get on a server? @hansonry found a chicken-egg problem with the early game that prevents progression.

A few more changes have made it in today, I imagine the latest develop build will still work for clients connecting to the server as-is. Excepting possibly some server-side changes like the ore distribution bit.

There is a v1.0.0 milestone for the engine on GitHub now although no blockers so far. I'm trying to collect some usability items we could hit over the next 2-4 weeks then do v1.0.0 as the next release after v0.54.3 (tentatively releasing tomorrow if all goes well)

More issues will get added and a v2.0.0 should pop up too for future planning.
I link, therefore I am. I tweet, therefore I work. Rainbow collector, undaunted optimist, organic search bot, and crazy idea guy. Will give serious thought to anything at least once. Do feel free to disagree and express productive counter views, in public or via convo, any time!

Contributor
Design
Logistics
SpecOps
Last bit for now: I went over every single open issue in the engine repo on GitHub to see which might matter for v1.0.0, and v2.0.0 for that matter. Closed a pile of stuff too. Sorry for the notification spam!

v1.0.0 has a full 51 issues in it now, but that's with a lot of probably-already-done or super simple things that just need a quick bit of work or confirmation that indeed it is no longer an issue. Then lots of niceties we could work on before releasing v1.0.0 - I'm thinking we could aim for December 1st. I know a lot won't be done by then and that's fine, but this way we have a nice grouping of mostly usability issues to hit

I also looked for things that may cause changes to the modding API by fixing some quirky behavior witnessed in the past, marking those as "blockers" since they could be either fix now or in v2.0.0 (or fix with backwards compatibility in mind when it happens). Again chances are that some/most of those are invalid or non-issues for v1.0.0

v2.0.0 mainly has the entity system overhaul but I kept an eye out for event-related issues that might be affected by it or good to look at while in there anyway. Couple other big fish for the future in there too just because they almost certainly won't be in v1.0.0 and would need a major release.

There is one giant doc issue now as well with 20ish sub-items that'll likely grow. We should really hit documentation hard as part of v1.0.0. More details later.

@minnesotags also updated his server to the latest dev build as of this writing + reset the world for more testing. Good stuff and it has more minerals now too

I'll try to release v0.54.3 sometime tomorrow or Tuesday then I'm flying to NYC Wednesday for a family visit + a charity event to meet Bill Nye (nerdy woo! ). Back next Monday sometime. Will bring computers but may be checking less.
I link, therefore I am. I tweet, therefore I work. Rainbow collector, undaunted optimist, organic search bot, and crazy idea guy. Will give serious thought to anything at least once. Do feel free to disagree and express productive counter views, in public or via convo, any time!
You must log in or register to reply here.
Share:
Facebook Twitter Reddit Pinterest Tumblr WhatsApp Email Link
Top