Ludicious happened in Zurich Jan 18-21st and a few of us were in attendance with a booth and everything. The day before it started we managed to briefly peak at 8 devs present and tried out doing some tech sessions and discussions. A good time were had by all and then a few engaged in the physical sacrifice of standing by the booth sometimes for 9-10 hours straight. Yeah definitely going to aim for seating space when we do something like that again 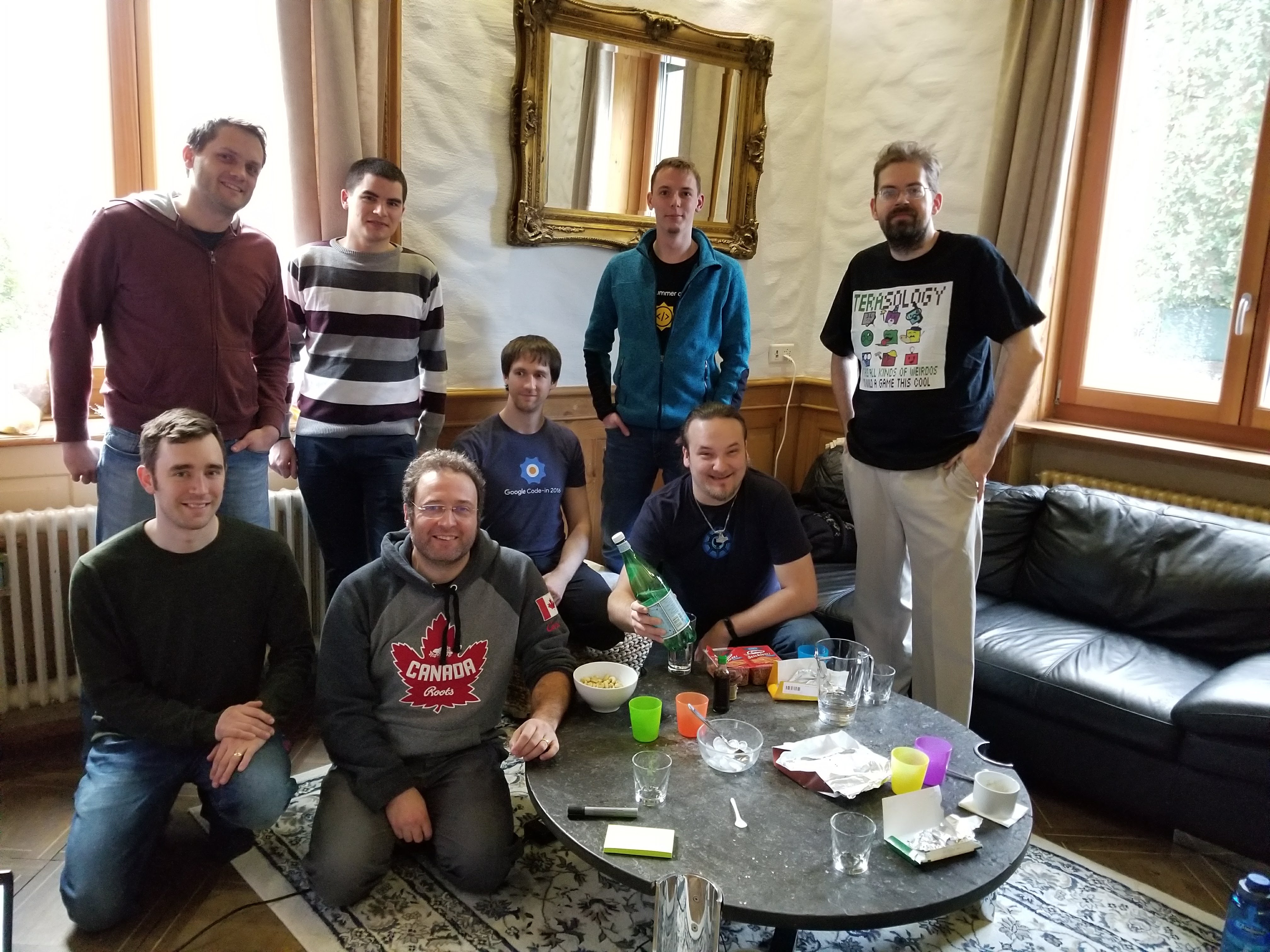 At the convention we talked to a bunch of people, led a few through demo coding exercises, did some live coding sessions, and got some impressions of what going to a conference would be like. I thought it could be a good practice round before we go to anything more "serious" like a PAX or something. We also took lots of pictures.

The event attracted some news coverage, like this article from Rolling Stone or a video clip from SRF where the Terasology booth is visible like in the background at 1:26

Yesterday the winners for GCI were announced and our two were Eviltak and Ghost - congratulations! Everybody in the top 10 (11 really) plus plenty past that point did great work, we just only get a select number of special spots to hand out

We hope all you students out there had a great time, I wish I had been more available personally but my holiday trip ate most my available time. There is a student recap thread as well as a mentor recap thread to get impressions from both sides. Anybody who participated yet hasn't filled in either thread yet please do if you can. Any students who would like more personal feedback on how they did please private message a mentor somewhere to ask.

Next up is GSOC org announcements on Feb 12th, when we'll learn if we got picked as an org this year, so we get the whole "I wonder if we got picked!" stress as well! Our ideas page is on GitHub and contains a fair amount of entries, although more might exist in the issue tracker still plus even more in various heads, including my own

We've talked as an org a bit about mentoring and how to better structure it, if we do get picked we'll probably brainstorm that process further and make a public post about it. In short I've tagged mentors pretty eagerly in the past but some turn out to not really interact in the process at all (for either GCI or GSOC) meaning our capacity planning ends up problematic (it looks like we have plenty of mentors, but ..)

The goal was to release Alpha 9 before I left for Europe, but while I did prepare a Release Candidate (RC) including a rebuild of every single module in the lineup in the correct order, I then entirely ran out of time before really announcing it or doing anything with it, like prepare patch notes and release it on GitHub.

During GCI bunches of stuff got added although engine PRs piled up pretty bad, setting a new record up near 60 open at once, IIRC. Goal right now is to grab a few easy ones and any important module fixes and build another Alpha 9 RC for Saturday's test. If any readily fixable bugs are found we'll try to fix them and prepare a final RC I'll do some spot testing on myself then finally release

Alpha 9 is likely the final engine v1 release. Immediately after its release we'll be merging in the v2 engine branch plus a pile of related PRs all over the place. Modules will break, villages will catch fire, peasants and nobles alike will cry out in anguish - it'll be great!

As our first major engine release since we adopted SemVer this is the first time we're allowing in changes that will not be backwards compatible, meaning modules may break when built against the updated engine. Save games are also likely to break, but then they haven't been monitored for stability as much as the modding API itself. Some highlights of new stuff coming:
After everything is merged in we'll take some time to stabilize but this may take a while. Alpha 10 built on engine v2 ideally would be released before the next GSOC work period begins in May, assuming we get in.

In other news we've upgraded the forum here to the v2 version of Xenforo, which broke some of our addons while others were added. Being on a newer version perhaps also got us the dubious honor of being compatible with some popular spam bots again, so forum spam has picked up.

Right now admin approval has been added for new users while we experiment with a variety of anti-spam measures. We've also enabled https at long last and that is likely to slowly get hooked up for our other sites as well.

More site work is likely to come, like finalizing our developer/documentation site, building more GitHub Pages for a variety of reasons, better tutorial setup, and so on. If anybody notices site problems anywhere please let us know
Last edited: Feb 8, 2018
I link, therefore I am. I tweet, therefore I work. Rainbow collector, undaunted optimist, organic search bot, and crazy idea guy. Will give serious thought to anything at least once. Do feel free to disagree and express productive counter views, in public or via convo, any time!
You must log in or register to reply here.
Share:
Facebook Twitter Reddit Pinterest Tumblr WhatsApp Email Link
Top