Contributor
Design
Art
I thought it might be cool to leave tidbits of Lore in the form of glyphs. Basically there would be ruins scattered throughout the Realm. These would have little pieces of information on them. Visiting all of them would unveil a story about the world.

Players could earn something for finding all glyphs in the story, and for obtaining a possible prize the glyph's point toward.


example of a glyph for this game:

Contributor
Design
Art
Hahaha ... this is what I get for taking an Alkaseltzer nighttime cold medication ...

Contributor
Art
Hey SuperSnark sorry about the delay. Sure, I might give some of the pieces a try this weekend. Can't promise anything but I think I'll have time to. Have any preference on which one you'd like to see?
Interesting idea you have going here. I like your concept art too. It would make a fun mod to the base game.
Gone until further notice.

Contributor
Design
Art
Whatever you want to give a try to would be great A'nW!

Maybe flesh out the red team? Pick whatever's remaining: knight, king, rook, bishop - whichever you like best or feel inspired to give a shot.

Contributor
Design
Art
OK, here's the aforementioned ancient glyph in actuality. =) I need to work on the stone texture. I'm not happy with it; but at least you get the idea.

So basically you'd have, say 10 - 20 of these kinds of things scattered across the Realm. Hunting them down would mean entering enemy territory and distract you from the "main" game - that being crafting new resources / chess pieces / making new defensive/offensive structures, etc. But it would provide you with some enhanced ability or power.

I was thinking maybe viewing or "harvesting knowledge" from the objects would provide the player with a key (perhaps physical) to the central portion of the map, the heart of the Pachisi board on the map. And essentially unlock it, revealing a hidden chamber underneath with some type of powerful artifact.

I may actually flesh out a wordless story in this manner and post it to a new thread. This would provide visual history of the world and the origins of some of the symbols used by the chessmen as well as perhaps the origin of their conflict.

I think it's a way to add depth to the game, make it feel more lived in/real without shoving pages of text in front of someone or really intruding into the game. If they want the history, and like it, they can have it, as well as a reward for their curiosity.

If any of you have played Journey I'm thinking along those lines. 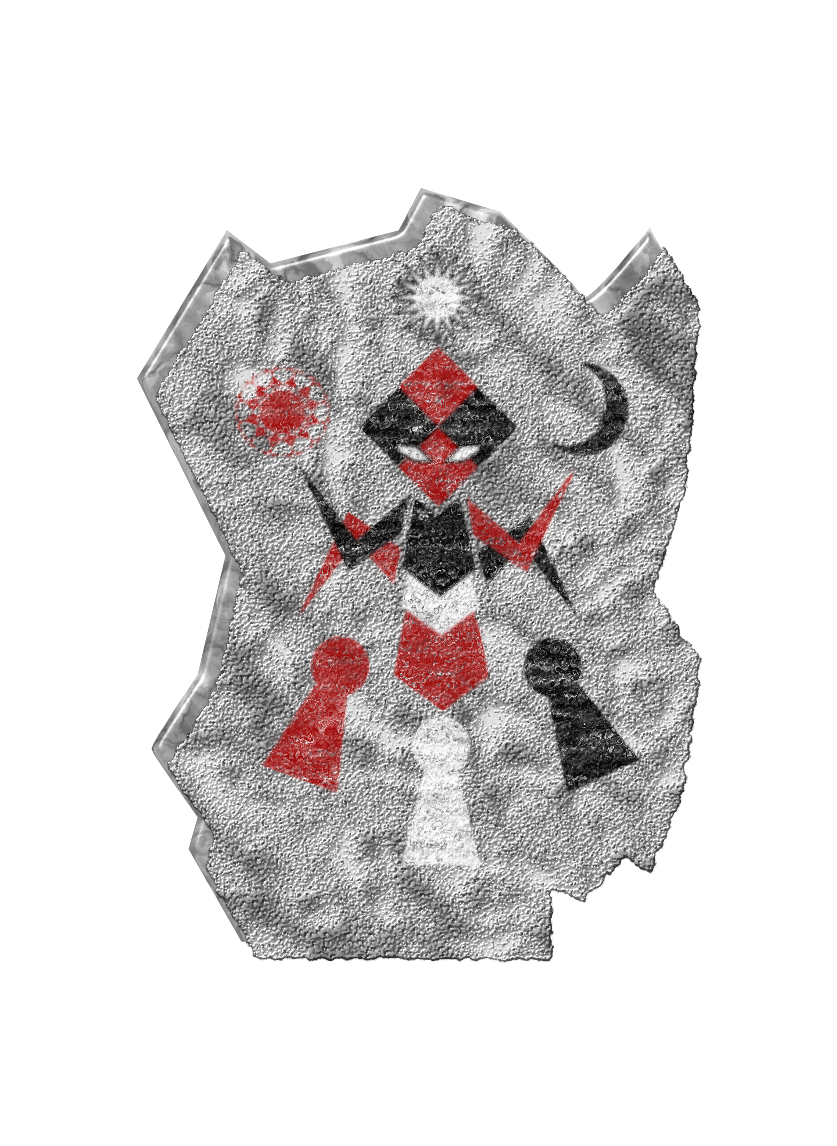 Contributor
Design
Art
So in the ancient glyph pictured above you'll notice there are 4 entities, 3 are pawn like, and one of those is white.

This third (white) faction will not be actively present in the game in the traditional sense, and yet will have a HUGE potential impact on gameplay.

I figured out the "history" of the chessmen last night. I don't know how to state the gameplay concept without spoiling a bit of the mystery, but lets just say that:

A long time ago, a goddess created three avatars, each to represent a special aspect of her power and be a warden of it. Each avatar was given a special scepter, to help dispense this power and create the world. Over time Red and Black avatars grew jealous and powerful and their creations reflected that. They eventually sapped the power of their scepters in the making of their creations. White chose to remain a pious, simple, holy being and did not take part in a growing feud between Red and Black. Nor did it use the power of it's scepter.

Red and Black armed themselves and their minions and warred against each other. White attempted to broker peace and was killed in the process. Red blamed Black for White's death and Black blamed Red. Both sides withdrew and vowed to continue to fight each other. The goddess took White's body and vanished. White's scepter remained where White fell, the ground opened up beneath it, and it now resides in a secret chamber in the center of the realm between the two factions.

OK, here is the EXCITING part about how this impacts gameplay. To unlock the hidden chamber where White's scepter lays, the player must visit each of the ancient glyphs that depicts this story. Gameplay wise there would be a checklist for the player and once each glyph is accessed and all boxes are checked, the player will have the "Key to Enlightenment" in his inventory. If the key is taken to the center of the gameworld where the center of the Pachisi board is located, he can unlock the Chamber of the White Scepter.

At this point the player will have a choice that will impact the ultimate outcome of the game:

1. The player may choose to retain his/her original faction allegiance, and change all of the opposing faction into white pawns.

2. The player may choose world peace and turn EVERYONE into a white pawn.

3. The player may turn traitor and turn only his own faction into white pawns.


Keep in mind that this power does not make the player invincible. The player could still be killed, at which point the scepter would return to its Chamber and have to be unlocked all over again.

So this would be an alternative endgame to the traditional and still very possible other ways to win the game, which would be:


Whatcha think? How's that for a Lore Reward? I think the difficulty of accessing every single glyph point and the continued vulnerability of the player wouldn't make it too overpowered, but that's something that we'd have to watch if we implemented it.


Oh, and I don't think we'd ever overtly "tell" the player this option was possible. Maybe hint that a powerful artifact could be theirs if they research the history of the Realm, but leave it at that.

Contributor
Design
Logistics
SpecOps
Well dang! I've barely been able to spend any serious time online since going on vacation, didn't expect to find anything this impressive having developed in the mean while. Excellent work, SuperSnark and glasz ! Very awesome, love it all, and especially that we have implementation notes and models including animation brewing

Pinging the other Art Team members to see if somebody would like to help out with more models!

Rather than necessarily build landscape models we can build some of it out of basic blocks / block shapes. May be easier. Block structures / Grammar definitions should be able to handle some of it - Skaldarnar what do you think?

Main implementation piece seems to be an alternative world gen for this game mode that would create a very finite world of a specific shape, with edges, and probably preset biomes based on the world map earlier in the thread. Maybe a variant on the heightmap gen - Nym Traveel you hiding out there? We could use a terrain gen selection as a fake game mode picker for now.
I link, therefore I am. I tweet, therefore I work. Rainbow collector, undaunted optimist, organic search bot, and crazy idea guy. Will give serious thought to anything at least once. Do feel free to disagree and express productive counter views, in public or via convo, any time!

Contributor
Design
Art
Thanks for the props Cervator! Glad you like what we're up to. Seeing some of my conceptual stuff come to life via glasz's handiwork really got the creative juices flowing. I think we're on to something here! Hopefully we can keep the momentum rolling. It'd be insanely gratifying to see some semblance of this vision make it to reality.

Start saving up for that 3D printer. There's gonna be a big demand for real life chess pieces / sets based on our wildly successful game. Maybe we'll even modify the rules a bit with some new pieces! I'm thinking the Fool sits on each end of the row of pawns, replacing 2 in total. It can move like a bishop (only diagonally), but only one space at a time and attack in any direction. Oh and it also does a really bad stand up routine, a few mime gags, and some prop comedy.

Contributor
Design
Art
I was just thinking, the glyphs might be good as a pre-release teaser as well ...

Contributor
Art
Awesome work! I love the idea, if that gets implemented into the game I'll focus 24/7 on that gameplay element 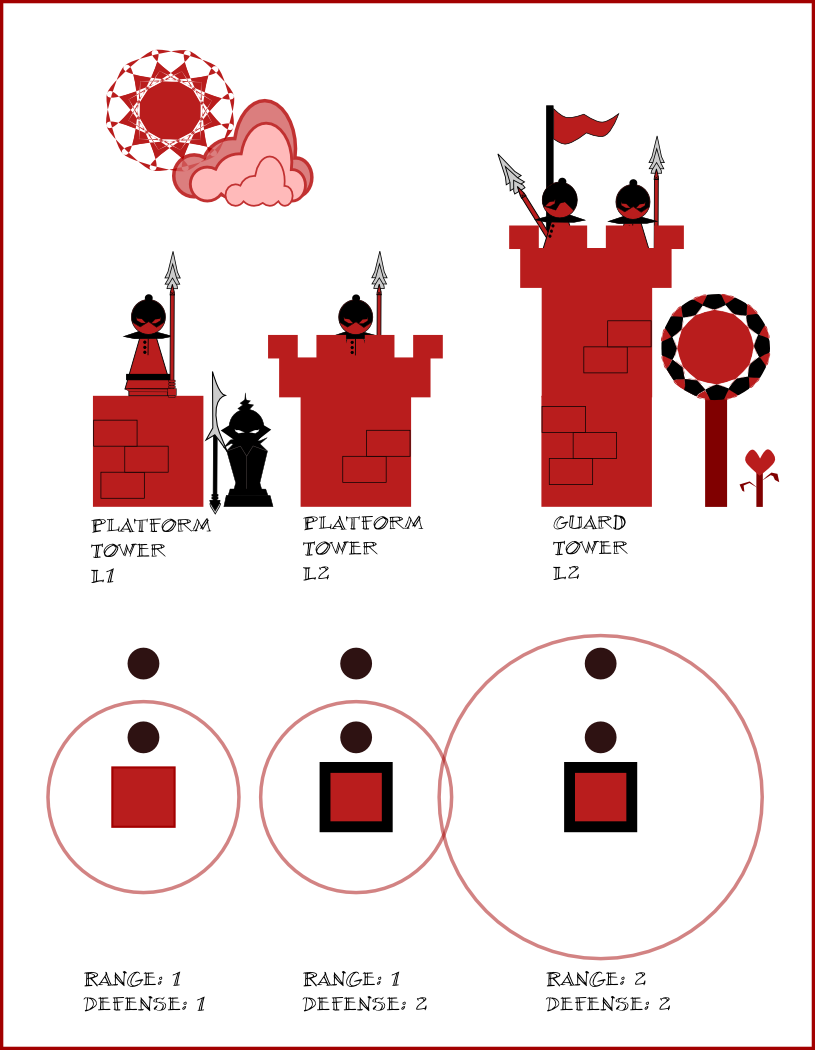 The higher the player builds, the more costly in materials. Building a structure above a certain height would be prohibitively expensive; though not impossible. (Maybe there's an achievement called Reach for the Stars if you build a ten story structure). The cost limitation is primarily a way to limit the overall range a tower would possess, keeping them from being overpowered or too far reaching.

The structures themselves can be free form and left open to the player's imagination on how to best build the structure (cost of materials being a limiting factor). Walls might be used to cut off strategic points, coupled with multi-story towers for added range and defense. Our code would use some basic interpretation to assign defensive and range bonuses. We might add certain things, like the flag, to let them know what level or capability they've reached with their structure.

A low ranking NPC or player could attack stationed pawns, but not the structure itself.

Rooks and Queens would be able to demolish walls and towers.

Siege weapons would be able to demolish walls and towers.

Some specific areas of the map may be off limits to building, but otherwise it should be very open. 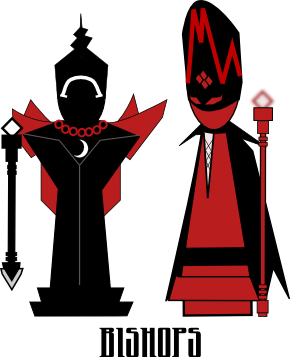 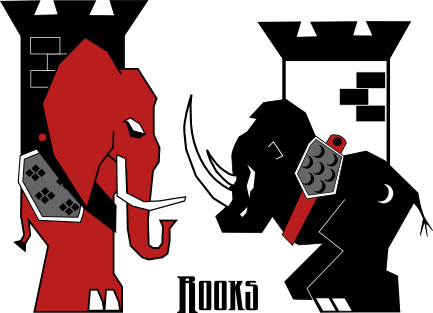