Contributor
Design
Art
I really like the beard sway glasz . I didn't notice the glitch you mention.

I was thinking for phase 1, the winning condition might be as simple as capturing the opponent's king (chess themed).

Contributor
Design
Logistics
SpecOps
I don't see anything wrong with the beard either. Looks good
I link, therefore I am. I tweet, therefore I work. Rainbow collector, undaunted optimist, organic search bot, and crazy idea guy. Will give serious thought to anything at least once. Do feel free to disagree and express productive counter views, in public or via convo, any time!

I hope the directory structure i made is ok.

Right now there are only the .blend and texture files has i have been unsuccesfull with my attempts to export to .md5.

I plan to complete the red team in the next days, starting with the red bishop. If anyone has plans to make either the red bishop or the red knight, please let me know

Contributor
Design
Art
I can't wait to see these in game!

For some reason the look of his cape makes me think he's going to start spinning any moment and either take off like a helicopter or start chopping heads off with said cape
I link, therefore I am. I tweet, therefore I work. Rainbow collector, undaunted optimist, organic search bot, and crazy idea guy. Will give serious thought to anything at least once. Do feel free to disagree and express productive counter views, in public or via convo, any time!

Contributor
World
Architecture
I don't know if it was intended, but it looks a bit like a "seahorse" (going slimmer towards the bottom).

Contributor
Art
I suspect it was, but SuperSnark can answer that better than I

Now i need to make their weapons, and hands. By the way SuperSnark, what kind of hands, if any, can the knight have?

Contributor
Design
Logistics
SpecOps
Red knight sticks out to me now that I see it as a model. Not exactly sure why, but maybe haven't noticed before how little non-red it has vs. some of the other models. All the red humanoids have black masks and only the rook is left without one - but it carries a large black tower instead. Red knight is also a little more angular than the rest of the red team (which is doing the more smooth thing than the asymmetrical and "hard" black team). It matches the original concept fine though

SuperSnark - thoughts? Now that I'm looking I'm spotting a few similar cases for the black team, particularly the knight and (depending on the concept version) the black rook, which may have a black tower (or a partially white one in one piece). On the black team the thing to do seems to be red capes, which works well IMHO (maybe the pawn and queen should have a little of that added). Perhaps the knights should have manes in the other team's color rather than gray, and the black rook a red tower?

Either way don't pay too much attention to my nit picking, just thought I'd mention it
I link, therefore I am. I tweet, therefore I work. Rainbow collector, undaunted optimist, organic search bot, and crazy idea guy. Will give serious thought to anything at least once. Do feel free to disagree and express productive counter views, in public or via convo, any time!

Contributor
Art
Cervator : dunno, i like the knights this way. It's true that they stand out a little, but the way knights chess pieces stand out in being more detailed and all, so i find it consistent with the rest. Not saying our knights can't look different of course...

Contributor
Design
Art
I think the red knight looks great! Most real pieces in chess have the same tubular bodies. If you think about the king, queen, bishop, pawns ... they're all kind of tapered columns of various sorts. The knights have always been their own distinctive shape. It's true that the black team's theme is a bit more angular while the red is a bit rounder; but I don't think we want to alter that basic, iconic look to our knight. I can't imagine making him "rounder" - to me that wouldn't feel right.

You could experiment with thickening the ankle a tad, but to be honest I kind of like it this way.

We could also maybe add a strip of black down the top part of his head/nose. The knights are a bit less "clothed" than our other pieces ... I'll experiment a little with that.

glasz - what if we do a cloven hoof for hands. We can wedge a sword in the gap. Maybe the hooves are black instead of red? That might look nice with the red sword. We could also do the first level of the foot in black to represent a hoof. Hmm. Play around with it glasz and if it looks good, go with it, if not, nix it.

I've been reviewing our Moscow reqs for what UberWaffe called pre-alpha and first test and I'm integrating that with what I've seen that we can currently do (or should be able to accomplish fairly short term) and calling it Phase 1.

This would be considered a fully functional "game" rather than a test, but I think it should be do-able by leveraging much of what we already have with a few tweaks for things we need. Please let me know what you think. If something doesn't make sense at first be sure to read through to the end.

The game world will be small and pre-defined. Each side will be identical to the other.
The center of the game world will be a maze like the one synopia generated for the pathing test.
Enemy AI
AI at this point will be based off a combination of our pathing code synopia developed and our gellcube attack, with a few tweaks:

Crafting the Crossbow
The crafting part will be optional. The player will be able to craft and collect wood and stone, as is currently capable in Terasology and use this basic material to construct our old railgun. Instead of calling it a railgun, we'll call it a Crossbow and scale it's firepower back. The idea is that it would fire a combustable bolt that would knock through blocks, making it easier to punch through walls and providing a ranged attack.

The player will not be modeled in Phase 1 and will simply act in 1st person perspective.

Garnish (Wish List/Could Haves, etc)
If we have any NPC flora/fauna ready (chogs, backgammon style trees, etc.) we can plop them in, if not, no biggie.


I think the above will keep some of our fundamental goals of L&S in place (build, destroy, craft, fight) while providing us with a basic, achievable first version of the game.

Contributor
Design
Logistics
SpecOps
Good stuff. Yeah, this sounds like it would about match with alpha/first playable, while when we talked last night I was thinking it was more minimal matching the milestone link (first testable, not playable yet). So not to nitpick but I wouldn't quite call it phase 1, probably more like 2 or 3ish

Or "alpha phase 1" etc - fun with versioning! That's minor, anyway. Need to get used to some sort of convention.

How does the safe zone in the middle work? Suppresses combat? Blocks pathing so creatures can't go there?

One big thing we need is taking the height map gen tied to the L&S mode now and make it do custom stuff based off key markers on said height map (the walls, keeps, etc). MPratt - you out there somewhere?
I link, therefore I am. I tweet, therefore I work. Rainbow collector, undaunted optimist, organic search bot, and crazy idea guy. Will give serious thought to anything at least once. Do feel free to disagree and express productive counter views, in public or via convo, any time!

Contributor
Art
What scale for the maze corridors? I figure something relatively large, so that even rooks can walk there (even if they're not concerned by this phase of the game), something like 3- 4 cubes wide?

Contributor
Design
Art
Since Terasology is such a great block builder I was re-thinking the "pre-made" wall for the team the player initially chooses.

It might be more fun and interesting if we alter the Phase 1 formula a bit as follows:

1. The player starts the game in or near a smallish "keep" in which the king resides. A small number of NPC guards exist (3 - 5). The NPC friendly guards would not respawn.
2. NPC Spawners create Enemy pawns that attack.
3. The NPC Spawners increase production rate at specified time intervals:


It should becomes apparent that in order to progress, the player should build a defensive structure to protect the King (it would become time consuming to fight them all off at first and eventually impossible) - but the defensive structure's design should be left up to the player. As long as the wall is high enough that the Enemy cannot jump it, and can't go around it, it will suffice in this early iteration.

Similarly to protect the player while crafting in the crafting area, a wall could be built to give the player breathing room to harvest resources and craft. After crafting the crossbow, perhaps it's then possible to eliminate the enemy spawn points (blow up their towers).

Alternatively, the player could locate the spawning grounds and build containment walls around them.

I think the free-form building element is something that we should never forget to emphasize, even early on, as it sets our game apart from others. It celebrates creativity and that sandbox element that other games lack.

Once the initial "rush" to defend the King is over, the player would have a little breathing room to venture into the maze area, craft the crossbow, explore, etc.

One thing I want to do is create spaces of tension and of rest/exploration - so that there is a balance to gameplay - even at this very early stage. And to the extent possible, leave some room for creative play choices for the player. 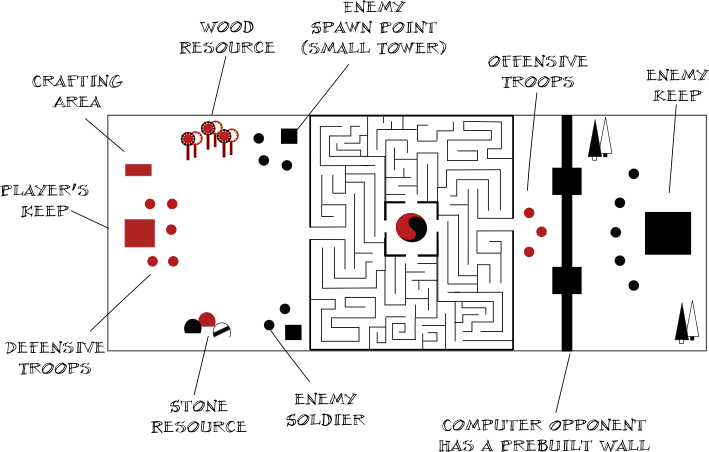