Contributor
Art
Could you remove the music? Elsewise no German can actually watch your video.

I've posted this to our social outlets and lots there are also noting the music causing it to be blocked in Germany. Maybe we should stick to using the Terasology soundtrack pieces for videos? I'd like to think that wouldn't get blocked
I link, therefore I am. I tweet, therefore I work. Rainbow collector, undaunted optimist, organic search bot, and crazy idea guy. Will give serious thought to anything at least once. Do feel free to disagree and express productive counter views, in public or via convo, any time!

Contributor
Art
Yup, i tried to upload a no sound version but ran into some technical issue (again) and kind of gave up.

Contributor
Art
Hey there SuperSnark, sorry about never getting back to you. I actually did whip up one of the red team. The Red King (which I think looks cool), check him out:

I modelled it awhile back, but have just now gotten around to uploading a picture. I see things are still moving along here. Don't know if I'll make any more, so yeah. I don't have a lot of free time, and a lot of things that need it... .
Hope you like it.
Gone until further notice.

Sorry to hear about the time trouble! I hope RL clears up / gets better
I link, therefore I am. I tweet, therefore I work. Rainbow collector, undaunted optimist, organic search bot, and crazy idea guy. Will give serious thought to anything at least once. Do feel free to disagree and express productive counter views, in public or via convo, any time!

I started to create a texture pack fitting for the setting. My goal was/is to keep the textures clean and simple. All in all it should look a little bit like a game board. As already discussed a bit in IRC the basic textures are still recognizable (like dirt, sand, grass, ...). The next things to change are the items (like chest, ladder, ...) and the flowers/grass.

Edit: Note to myself - try to design opposing blocks (like red and black bricks). May involve additional blocks (like redbrownish and blackbrownish dirt) or just force blocks in different roles (grass -> red side, sand -> black side). 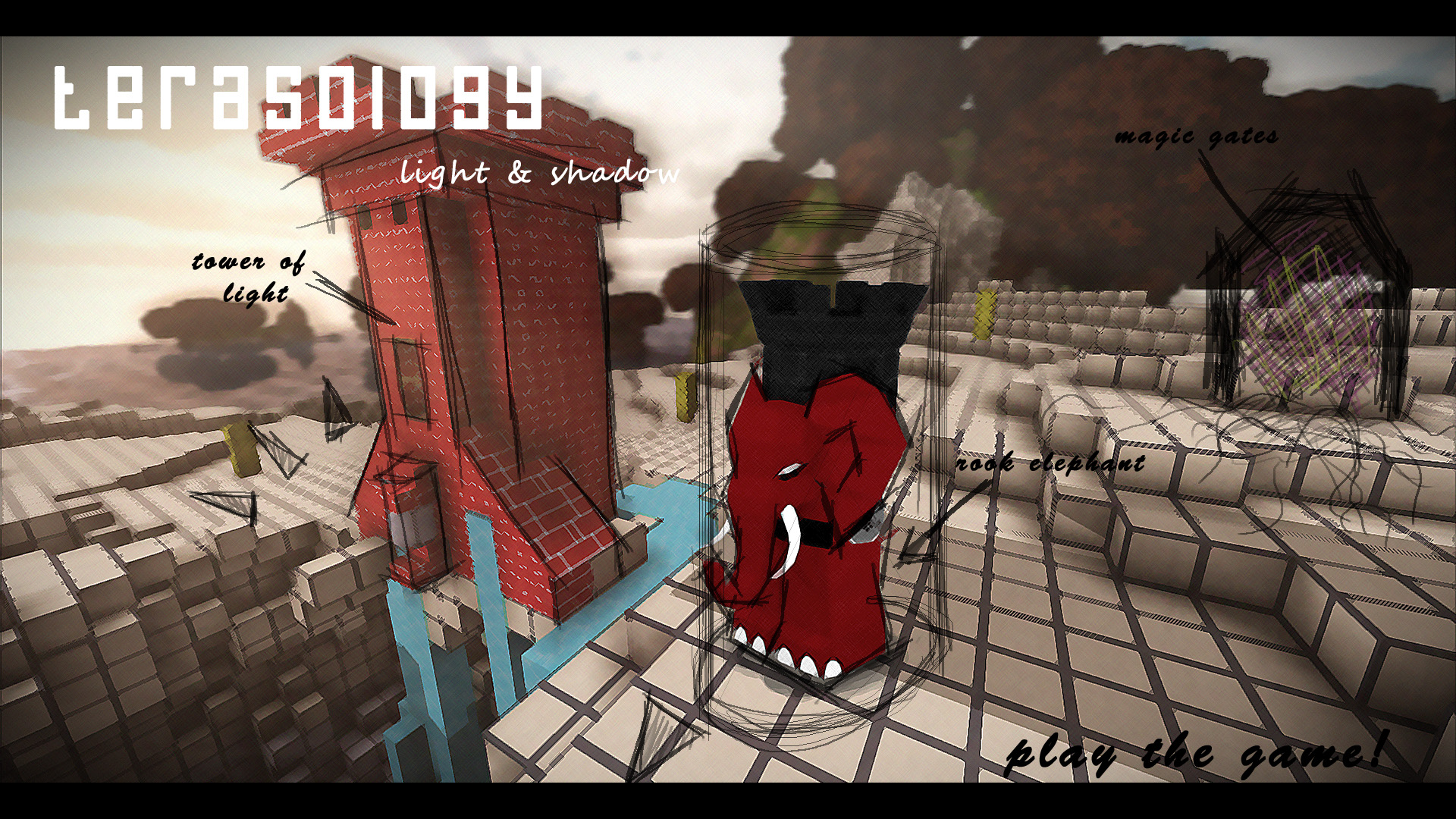 Contributor
Design
Art
One thing I thought might be cool is to have alternating grass patches of lighter shades of black and red. Maybe these would only exist in contested areas ... as territory expands or contracts; perhaps the terrain color changes in response?

In the picture above, maybe a 4x4 or 8x8 area would have pink "soil" and light red grassy stuff. And alternate with another 4x4 with gray soil and dark gray grasses.

And as an alternate to our normal Terasology flowers we could use hearts/diamonds and spades/clubs.

Contributor
Design
Logistics
SpecOps
SuperSnark - do you mean grass blocks or billboards (waving grass) ? If that matters, you probably mean both

Love the idea of little flowers with card icons on there.
I link, therefore I am. I tweet, therefore I work. Rainbow collector, undaunted optimist, organic search bot, and crazy idea guy. Will give serious thought to anything at least once. Do feel free to disagree and express productive counter views, in public or via convo, any time!
M

Contributor
Logistics
I think we need a special world generator with new blocks and new biomes.

But at first we need to move the world generators, biomes, ... into a mod.

Contributor
Art
World
SpecOps
SuperSnark, flowers in the shape of card icons sound right, I'll change their appearance next. The patches of grass/soil remind of that color gradient thingy for grass. If we can support overriding of these shader resources as well as for the textures we may use it for black/grey to brown/red gradient which is applied to the grass blocks, controlled by the "influence" of the parties.

mkalb, world generators and moving them to modules are definitely out of my scope for now Above all, I needed the textures for the screenshot used in the wallpaper. And I thought it would be a start to have at least the/some textures in-game.
-- Skaldarnar
M

Contributor
Logistics
Skaldarnar Yes, it is good to start with textures. Thank you.

And then of course we'd need the poker chip and backgammon shaped trees.

For trees, would we want to create custom 3D assets, or would we use the game engine to build them? If we use the game engine, would it be possible to move away from the chunky 8 bit look? I like the existing block-y nature of our bricks and building materials, but for the rest of the world I thought it would be nice to move away from 8-bit. Clean/simple textures rather than the 8-bit style.

I think that will help differentiate our look from Minecraft.

Contributor
Design
Logistics
SpecOps
mkalb - we do need world gen overhaul but that's a big topic. Nym Traveel is beginning to get back into contact and might be able to help out there over the long term

In the meantime we might be able to just tweak the create world interface a bit to where the "Game Type" setting supports forcing a specific map generator and selection of mods. That shouldn't be too bad and would allow us to pick a custom map gen combo that bases the world off a fairly small heightmap - meaning the world will be the same every time, which I think is a good way to start with L&S. I've talked to MPratt a bit about potentially doing that

SuperSnark - I think we could use block shapes and generate multi-block objects to make poker chip trees and such. Might be a little awkward but fully supported. Think a narrow trunk shape/block 2-3 blocks high + a 3x3x1 block big poker chip with the center (and maybe center-sides) full blocks and the remainder of the blocks in partial circle shapes. Then they'd fully follow block physics and support being blown to pieces.

The trick really is generating/placing them in the world. We probably could use a tree gen that simply places hard-set block structures, ideally loaded from a blueprint written to a prefab. I nearly did that with bigger portals ages ago.

I'm not opposed to different types of world objects using different styles, if the overall look fits
I link, therefore I am. I tweet, therefore I work. Rainbow collector, undaunted optimist, organic search bot, and crazy idea guy. Will give serious thought to anything at least once. Do feel free to disagree and express productive counter views, in public or via convo, any time!

Contributor
Design
This sounds like a really awesome mix of DotA and BattleZone 2 and Dwarf Fortress.
Is the focus of the player going to be kept mostly on supporting the army in fighting the opposition?
(As opposed to DotA that is more a PvP focus.)

Will resource be 'infinite' in that they can regenerate and/or not be mined up entirely?
(I.e. trees, stone and iron 'regrow' at a fixed pace. So a deposit can give an initial big boost, and then thereafter a slower trickle of resources.)

Art is also looking spectacular at the moment.

It might also be useful to add some sort of 'engineer' type unit role to each side. (Jack 'o' Trades for the name?)
It would do no real combat, but instead seeks to remove (or bridge) obstacles and traps along the attack lines.
(Perhaps also mine into and bomb towers).

Also a question on the movement mechanics.
Will there be defined 'routes' that the opposing armies use to attack one another?
I ask, because I think that down the line it might be awesome to have smaller variations within the overall map layout of "Left, Center, Right", in that you can have multiple main 'routes' to the enemy, including high roads or mine tunnels.
(Engineers would only seek to keep these main routes open/clear).

I think that making the majority of the army squads take the normal routes, and then perhaps have only specific units / specialist squads do dynamic / opportunity routing would be quite awesome.
People just can't stay away from me... but that is because I'm so fat I have my own gravitational field.
It's the flying cutlery that stresses me out.

Contributor
Design
Logistics
SpecOps
IMHO the player should be doing more army support than combat, yeah, both because it probably would be more novel as well as easier to deal with as we can simulate the NPCs better in pitched combat than your average arbitrary player. Earlier I mentioned the idea of the player building defense towers and hooking them up to power or conversely sabotaging enemy towers or supply routes.

It could be sort of like DotA (disclaimer: I only know a little LoL, but they're all the same right? Heh) in reverse where you start with a tiny base and have to grow it from there to get more and stronger NPCs. Then they go beat up the enemy base. Player solo should probably be squished easily by starting base defense towers, thus the need for NPCs.

Also reminds me a bit of the old school Alterac Valley battleground in WoW, where you would have side-quests to gather resources and free NPCs, or even go out to mess with neutral NPCs for some advantage.

As far as the exact gameplay when it comes to resources, roles, etc, then I think that's an incremental improvement process - start with the very basic of a map with a static tower at either end and a simple stream of NPCs just going after each other till the player(s) tip the balance somehow

Then with "0.1" done we can look at all the options like NPC roles, alternate routes, regenerating resources, and so on. It is almost like we need some sort of release plan / MoSCoW map
I link, therefore I am. I tweet, therefore I work. Rainbow collector, undaunted optimist, organic search bot, and crazy idea guy. Will give serious thought to anything at least once. Do feel free to disagree and express productive counter views, in public or via convo, any time!

Yeah. Really really looking forward to v0.1 of this.
People just can't stay away from me... but that is because I'm so fat I have my own gravitational field.
It's the flying cutlery that stresses me out.

Contributor
Art
I think the building / modification of the landscape part should remain at the center of the gaming experience, as it is mostly the point of voxel landscapes. I dont know how though But maybe some slower kind of strategy game, where creation of buildings, gathering of ressources are the main tasks of the player?
You must log in or register to reply here.
Share:
Facebook Twitter Reddit Pinterest Tumblr WhatsApp Email Link
Top